How to create and launch a successful multi-author academic blog

A multi-author blog collective is an effective way for a university or other knowledge-based institution to host discussion and debate. As part of a preview series of the new book Communicating Your Research with Social Media, the authors Amy Mollett, Cheryl Brumley, Chris Gilson and Sierra Williams look at how to set up an institutionally-based multi-author blog platform from planning, all the way to launch.

Planning and launching a social science blog is obviously not a guarantor that the venture will be a success. At the LSE, we have put a huge amount of thought into how we run our blogs, and the tactics and methods that we have used have adapted and changed over the past half-decade along with trends in blogging and social media, and in technology. There are a few ways of working that are common across all of our blogs, and a few stand-out “dos and don’ts” from individual blogs as well. We will take an overall view of the process, but will also identify where out specific examples come from as well as we explain.

The first – and possibly the most important – aspect about the success of our blogs has been the planning that has gone into them prior to their launch. Since 2010, the LSE has launched nearly a dozen public facing blogs that are dedicated to research communication in one form another. Prior to launch, each blog was usually assigned a part- or full-time Managing Editor, responsible for all aspects of the blog’s operation, from commissioning new content, editing blog posts, entering them into the Wordpress platform. It is also their job to promote the blog and its content via social media channels. We have identified five stages that our blogs went through to get from idea to launch – Figure 1 gives an overview: 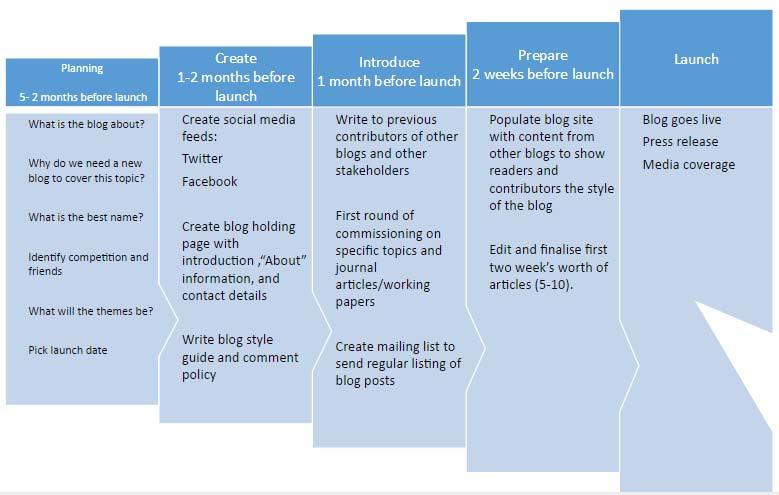 The first stage, planning, involved the team taking an overall view of what setting up a new blog would involve, including an analysis of competing offerings from other universities and online media outlets, as well as what our blogging ‘friends’ were doing be it at the LSE, or in the form of colleagues writing in this area both on and offline. An important part of this process was justifying the creation of a new blog. For each, after discussions across our team, we felt that an expert comment blog would be fulfilling an existing need for commentary that was not being provided for anywhere else in a comprehensive form.

Perhaps the most important part of this planning stage is to determine the blog’s main themes. For our blogs which have had a more general ‘Politics and Policy’ focus, the themes have been relatively straightforward, reflecting disciplinary themes within the social sciences such as economic policy, foreign policy, social policy, politics and elections, and judicial policy, for example. Selecting themes – whatever they actually end up being – really sets the tone of the blog and the way that it covers various important topics. It is crucial to think carefully about these topics, and to ask a number of colleagues and those both within and outside of the academic fields in question as to what they feel the blog’s themes should be. It is also worth considering how the blog’s area of coverage may evolve in the months and years to come depending on political, economic and social changes in certain countries or even the world at large. It is much easier and better to set a relatively wide remit for the blog’s coverage via its themes, rather than to shoehorn in new themes to fit in changed circumstances months or even years down the line.

While it may seem trivial, the name of a blog is also very important – especially when there is already a great deal of competition within that commentary space. For each of our new blogs after 2011, the team discussed potential names, and then shortlisted these down to two or three likely choices. We then used Google Trends to examine the number of online searches around the words in the proposed blog’s name, as well as web searches to ensure that it was not already in use elsewhere. We decided that rather than using a less-descriptive name as others had previously, for example, The Monkey Cage, Crooked Timber or a pun on political science such as Ballots and Bullets or Politics InSpires (Oxford), that we would stick to simplistic, descriptive names, such as British Politics and Policy at LSE, or simple names with easy to Google acronyms like EUROPP – European Politics and Policy, and USAPP – American (or US) Politics and Policy. The use of such acronyms also made creating unique names for our social media accounts was relatively easy to accomplish as well.

The final part of the planning stage is to determine when the blog should be launched. Are there any important dates in the political calendar that a launch could be ‘hooked’ on to? Similarly, are there any dates that need to be avoided since stakeholders’ attentions will be focused elsewhere? In some cases, a ‘safe’ date was chosen where the date was neither particularly important nor eventful was chosen, simply with the intent that the blog would be launched sooner rather than later.

Next then, is Creation, where around one to two months prior to the intended launch date, the Managing Editor registers the social media feeds mentioned above and arranges for the blog to be created on the university’s blog server. Following the creation of the blog itself, we had to arrange for any header art, and a logo for the blog, also to be used across social media feeds. At this point the decision needed to be made as to whether the blog would be publically available even at this early stage. In most cases we did make it available at this point. When the blog site did go live, it consisted of a static page welcoming readers and giving them a short overview of the intended content and coverage that the blog would have. It also included details of the blog team, General Editor and the Managing Editor, and their contact details as well.

This stage was also a useful time for the Managing Editor to create a style guide for the blog, to be aimed at the blog’s contributors. This would give an overview of the length of post that contributors should be aiming for, as well as general information about writing style, and the editorial process that they should expect, and the timescales involved. The guide would also link to examples of similar writing to give contributors a more concrete idea of what was expected of them.

Now that the blogs had been created, at the launch minus one-month stage, blog Managing Editors worked to introduce their blog to the policy and politics community and to potential contributors. This meant collating a list of people at the institution who would be interested – and possibly able to contribute – to the blog after it launched. At this stage, editors would also select and then contact high profile authors from the LSE and elsewhere (including institutions at home and overseas) to write the first tranche of blog posts.

When selecting the first week’s blog posts, it is important for editors to keep in mind that this will be the blog’s ‘shop front’, and that these early posts will give people their first impression of the blog’s content – an impression that may be a lasting one. With this in mind, it is important that these first few posts come from at least one or two senior academics with close buy-in for the blog, and also cover a range of topics in order to showcase the breadth of the blog’s intended coverage.

It is also a good idea to consider starting an email list at the same time as these first contacts and contributors are being gotten in touch with. There are many ways that readers can keep track of blog posts after the launch, and it is a good idea to give a regular update via email. Web-based providers such as Mailchimp allow users to drop content into a regular email shot and avoid the fussiness of a more traditional Word-based mail merge. They can also give statistics about the number of email opens and which links have been clicked on. In our experience they also act as a touchstone for your readers and a way for them to get in touch with you to provide feedback and even suggest new blog article ideas.

The final stage prior to the blog going live involves making sure that the blog looks and works as it should do, is integrated with social media feeds, and is populated with interesting and engaging content. This also includes putting menus and pages in place that were mentioned earlier.

In addition by this stage – two weeks or so prior to the blog’s intended launch date – editors should have at least 5 to 10 blog articles on their way, with a submission deadline of no later than one week prior to the blog’s launch date. This gives enough time for editors to edit the blog posts once they’ve been received, and then send them back to the authors for the edits and changes to be approved.

At this point the blog’s Managing Editor would begin to create the structure of the blog – its menus, themes, categories, tags and pages. Pages will include an ‘About’ page describing the blog and its editorial team, a contributors page showcasing who has written for the blog, to be filled as articles are posted, a page linked to an email subscription form, and a page where readers can access a list of the blog’s themes.

The formal launch is not a matter of pressing a button and releasing the new blog venture – by this point the blog will have already been online for some time. The launch is about letting the world know that the new blog is open for business. This means ensuring that the university’s press office pushes out details of the blog to its contacts via a press release, and that those working on the blog itself let both internal and external colleagues know that it is up and running and what it will be covering in its first few weeks of operation.

Despite the great deal of work involved in the lead up to the creation of a multi-author academic blog, in our experience, a ‘live’ blog works at a fairly frenetic pace, with little let up or downtime. In the early stages, it is important to get a regular flow of contributions so that there is a regular supply of post. Depending on staffing levels, our experience has shown that a flow of at least one post a day is needed to build up a sufficient number of posts to encourage readership, and to supply social media streams with a regular flow of content.

Chapter 3 of our book Communicating Your Research with Social Media examines the ways knowledge workers can use academic blogging to promote their own research to wider audiences.