Keeping a diary on the Wales Coast Path 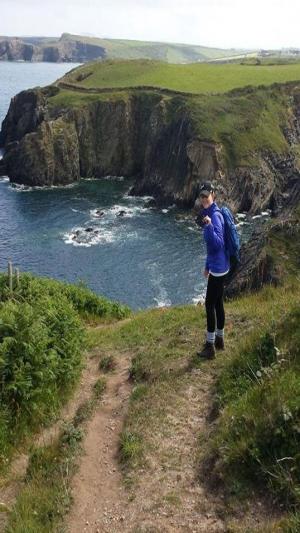 My research focused on the Wales Coast Path, an 870 mile continuous path that follows the whole of the Welsh coastline. I sought to explore the embodied act of walking and what it meant to be able to walk the coast of an entire country.  My fieldwork consisted of joining people on their walks and in total I took part in 40 walks, covering over 400 miles (and I had the blisters to prove it!). As well as interviewing people whilst walking, I kept an in-depth field diary which I wrote up the evening after each walk, based on short note-taking throughout the day.

But why did I keep a diary?  First, it was a tool of research in its own right. It allowed me to capture the embodied experience of walking that was central to my research question. It also supplemented my interviews by adding extra layers of detail to my explorations. For example, the walkers I interviewed stressed the freedom that walking offered them compared to the restrictions of everyday life. Yet the Wales Coast Path seemed to also have its own constraints. Walkers were committed to walking every step of the path. Observations recorded in the diary showed that walkers felt bound to the path and were unwilling to leave it to explore what was beyond:

The path took us inland through woodlands where I knew of a statue which chronicled Carmarthen’s maritime history. As the path meandered around the location of the statue I suggested we stop to see it. Yet the walkers had no interest in veering away from the path and merely pointed at the direction the Wales Coast Path sign guided us and continued purposefully along the path. (Walk 27: Llansteffan to Carmarthen, 9 miles, 18/10/2014)

The diary also allowed reflection on my positionality as a walker. It chronicled how my identity as a walker changed throughout the fieldwork. For example, at the beginning of my research I was clearly seen as the outsider in the group. At this time I hadn’t walked much of the Wales Coast Path. I wasn’t included in the pre-walk camaraderie and was often left holding the cameras for photographs. The field diary narrative showed that it wasn’t until I had proven myself as a walker – and that I could keep up – that the walkers became unguarded in their conversation. The diary also allowed me to reflect back on how time changed my walking experiences. As I noted a year after my first walk:

…with hundreds of walked miles under my belt I’m no longer seen as simply a student but a bonafide member of the exclusive Wales Coast Path club. [When] [t]he time came to take the obligatory group photograph; the cameras were no longer handed to me but to the newest addition of the group who had yet to prove his walking prowess. (Walk 42: Amroth to Tenby, 7 miles, 02/05/2015)

Keeping a research diary was an intrinsic part of my project. Recording observations from the very beginning of the fieldwork provided important and rich research data. It highlighted unexpected findings and demonstrated that sometimes there can be a disparity between what people say and what they do. It also chronicled my own development as a researcher and gave me a fascinating insight into how I changed throughout the fieldwork process.  Therefore, consider the benefits of using a diary in your own research. It will likely enrich your data with intriguing findings, and like my diary, it may reveal things you didn’t expect.

Amy Jones studies Human Geography at Swansea University, UK. Amy’s doctoral research focuses on the physical act of walking the Wales Coast Path, investigating the ways in which experiences of the path are understood, felt and sensed through bodily actions and the ways in which performances of walking, shape the people and places involved.