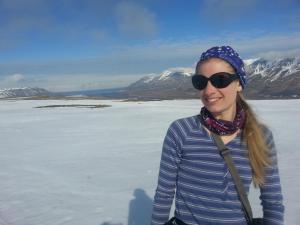 My research explored the concept of value in Svalbard, in the high Arctic. Over the course of three field trips, I investigated the relationships between the human societies, material landscape and non-human, or ‘more-than-human’ life there. I used a combination of research methods to collect my data: interviews, participant observation, questionnaires and focus groups. Alongside this, a research diary, photographs and audio recordings helped me to make further observations and reflections.

I realised that I would be bringing my own values to this research very early on. The project would involve me flying to Svalbard and this was a serious consideration.  Previously, I had been working for an environmental education charity and I had boycotted flying for seven years to reduce my carbon footprint. Field trips to the Arctic meant both engaging with and avoiding debates surrounding climate change linked to this region.  Yet I was also confronted with further (unexpected) challenges to my own environmental ideals when I interviewed participants about their values.

The hunting and trading of animal skins is one example. In interviews where this came up, I realised my line of questioning had been affected by my own values on the topic. Like all of my research, interviews would have been done differently by someone else, who would have likely asked different questions, eliciting different answers.  In such situations I found that my research diary provided an outlet for suppressed personal opinions on the matter, and the material I recorded here became useful in recognising my position throughout the analysis and interpretive stages of my work.

Other surprises had a more drastic effect on the shape of my research. At the beginning of my project I assumed that climate change would be a matter of great concern to the residents of Svalbard. I therefore thought it would be central to my project. However, I had to accept that not everybody was so focused on climate change, or necessarily agreed it was an issue at all. Hence, whilst still very much focused on the relationship between humans and the environment and the value-making processes between the two, my project did not maintain climate change as the centre piece of the research.

I was also very aware of being the ‘outsider’ in Svalbard’s small, close-knit towns. In a highly political environment where, as one participant noted, ‘everything everyone does on Svalbard, including the janitors, is part of a geopolitical framework’ (Interview 12, 27 May 2014), how I was perceived by the communities I was researching was important. In order to learn about the full range of value processes occurring in Svalbard, I needed to both suppress and enhance my own identities at different stages and with different groups. Whilst never concealing my role as a researcher, simple acts such as putting my camera away when wanting to blend in with the ‘locals’; being an over-active photographer when I was with tourists or the photography club, or keeping environmentalist outbursts in check, helped me to gain a large set of data from a wide range of perspectives.

Sam Saville holds a BA in Human Geography, and MSc in Architecture: Advanced Environmental and Energy Studies. She has worked as an energy advisor (at the Centre for Sustainable Energy) and as a researcher and tutor at the Centre for Alternative Technology and as a visiting lecturer at Chester University. Currently she is a research assistant for the ERC-funded Global-Rural project and is completing a PhD in Human Geography at Aberystwyth University.