Before embarking on my dissertation I found myself questioning how I would be able to make any sort of original contribution to geographical knowledge. To me, geography felt overcrowded and I felt overwhelmed by the task of intervening in such a busy and thriving discipline. When I began reading about the sea, however, this began to change. I found the sea fascinating and it presented me with an opportunity to explore and immerse myself in an emerging field of human geography. There was and is so much to be discovered about the earth’s watery spaces and I found these unknowns to be quite liberating when finding a dissertation topic.

During this time, I stumbled across a great case study on the BBC News website that combined my interests in the sea with those of political geography. Spanish Police divers had been photographed unveiling a Spanish flag over an artificial reef in British Gibraltarian waters causing outcry in both Gibraltar and Britain. I was intrigued by this use of depth for political gain and this led me to Stuart Elden’s paper on ‘Securing the Volume’ (2013) in which Elden makes the case for a three-dimensional understanding of territory – in other words he argues that we need to stop looking across landscapes and instead look beneath, up, down, and around them. I plugged into the debates taking place around Elden’s paper and read related work on the topic. From this I was able to identify a small hole that I could fill through my dissertation research. 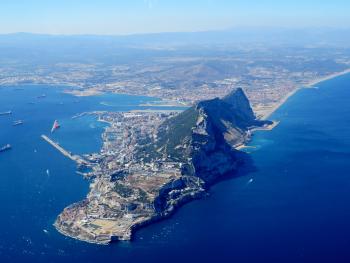 Discussing my ideas with my tutor and with other students was also crucial to pinning down a topic, as was finding a big piece of cardboard and creating a mind map of my ideas. I had to learn to be comfortable with an inherently uncomfortable process whereby my topic was changing, expanding, shrinking and escaping the box I had put it in at the beginning.  Indeed, whilst the sea proved to be the initial hook I ended up engaging with Gibraltar’s seas, skies, land, and economy. It was the result of a long process of learning what I was interested in, reading and re-reading literature, discussions, brainstorming and putting pen to paper. It was not straightforward and there was many a time where I felt a bit lost but this was all part of the process of turning my ill-defined interest in a particular space into a well-defined research topic.

Rachael Squire is a Lecturer in Human Geography at Royal Holloway University. Her research interests centre on the geopolitics of undersea space with a specific focus on undersea habitats and US Navy experimental diving during the Cold War. More broadly, Rachael is interested in the intersections between extreme environments and the body, subterranean geopolitics, and ideas pertaining to ‘territorial volume’.