1. One way of reducing complexity of the problem in large networks is to use K-Cores. The network file “Antarctica.##h” involves relationships among Wikipedia pages that contain the word “Antarctica”. The network contains 1337 nodes. First, visualize the network. In NetDraw go to File|Open|Ucinet dataset|Network and load Antarctica.##h and click OK (it may take a while to load). It is hard to see anything because of the sheer size of the network and the overlapping labels. To toggle off the labels go up to the “L” in the icon menu across the top and click. Click the green check mark to toggle off the labels. It is still very difficult to understand the network. To do an analysis of K-cores in NetDraw go to Analysis|K-cores and click on K-cores. The nodes will change various colors reflecting K-core membership. To view the core nodes, click on the “Nodes” tab in the right corner. In the pull-down menu select K-cores. Uncheck boxes 1 through 11. This now leaves the most central nodes in the network. We can now add the labels for interpretation. Click on the “L” to toggle on the labels. Can you now interpret relationships among the nodes?

Obviously, this network is extremely complex and difficult to interpret. However, by using K-cores the complexity of the network can be reduced by pruning some of the less central nodes. The K-cores analysis for the Antarctic network shows only nodes with a degree of 12 or more. The network can now be more readily interpreted once the lesser degree nodes have been pruned. 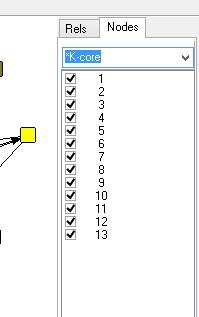 2. Besides using K-cores, what are two other methods for reducing the size of larger networks? Explain your answers.

Networks’ size and complexity can be reduced by the pruning of nodes, breaking the network into more manageable chunks, or aggregating nodes based on their attributes (including categorical attributes as well as membership in clusters). The chapter discusses several such methods including community detection approaches, such as the Louvain method for community detection, and the aggregation of nodes based on their characteristics (academic departments in a large university).

3. Run the Louvain method for community detection on the Antarctica data. Compare your results with the K-cores found in Question 1.

In UCINET got to Network|Subgroups|Louvain method. Load in the Antarctica network and click OK. Just as the various K-cores can be visualized to reduce network size, the various clusters identified in the Louvain community detection method can be visualized individually or in combination with other clusters.

Louvain Results for the Antarctica Network 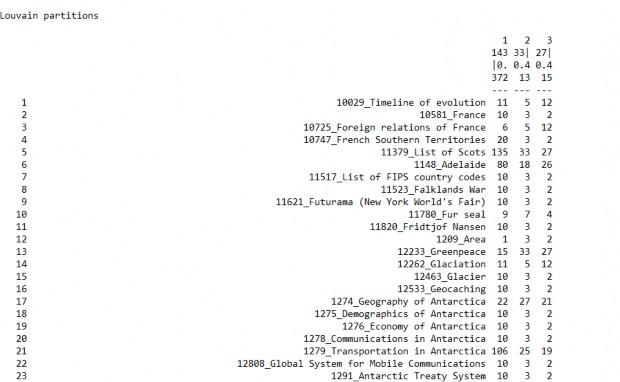 A cluster from the Louvain Community Detection Method (mostly a cluster of more ecological terms).

4. Sampling is often used to estimate the characteristics of larger social networks, such as average degree. What are some of the issues that will affect the accuracy of these estimates in large networks?