1. For the network boundary problem (Problem 5) in Chapter 3, provide examples of questions that a researcher might ask to collect network data. In addition, discuss the advantages and disadvantages for open versus closed ended question formats in each case.

a. A study of fraternities at a medium-sized Midwestern university

Sample question: Who are the members in the Kappa Phi Fraternity that you have interacted with most over the last two weeks?

Given that there is more than likely a list of members, this study would lend itself to a closed ended format where respondents can view a list of all members and either check whether they have interacted with each or rate the extent to which they interacted with members on the list.

b. The study of an informal gay group in an urban neighborhood

Sample question: If you were experiencing a personal problem, who would you seek advice from in the group?

Given that this would probably be a relatively small group, one could elicit members and produce a list that can be used for the relational question (see Chapter 3 exercises on bounding the network).

c. The network relations among active hunters in a small village in the Amazon

Sample question: When you go hunting, who are the hunters with whom you cooperate most frequently?

Again, depending on the size of the village this could use a closed ended format. However, given that hunters may cooperate with other hunters outside their village, an open ended format may also be more appropriate.

Sample question: Who are the CEOs of NGOs involved in the West African Dam Project (WADP) with whom you have shared information over the last month?

This context can use either type of format, but given the probably limited number of active NGOs in the area, a closed ended format might be best.

e. Food-sharing networks in a village in Central Asia

Sample question: Since the last rice harvest, with whom have shared food?

Given that this may involve actors both in and outside the village, it might be difficult to produce a list of potential network members a priori. Therefore an open ended format may be best.

f. The political network of community activists in a moderate sized city

We suggested eliciting from known community activists ‘other politically active people they know of in the city.’ In this approach we are using community activist’s emic distinctions as who counts as a ‘community activist’. This list can then be used to determine who is in or out of the whole network study and used to structure any network question.

Sample question: For the people on this list, who would you go to for help in organizing an event?

2. Network data can be extracted from both archival and electronic data sources. Provide an example of social network data that can be collected from each source.

3. When designing a social network survey instrument, what are some of the ways you can reduce respondent burden?

Consider only asking network questions that are directly relevant to your study (i.e., Avoid Fishing Expeditions!). Keep the survey as short as possible asking only survey questions needed to answer your research questions. In some cases, with extremely large networks, a fixed choice approach can cut down on the number of decisions and choices a respondent will have to make. These issues are even more important is network studies involving multiple data collection points. If someone is turned off early in a longitudinal network study because of the length of the social network instrument, they have greater chance of dropping out of the study or refusing to answer questions.

4. John, a social network researcher, is interested in the relationship between people’s frequency of recreational interactions and their political attitudes. Provide examples of the kinds of questions John might ask, using both an absolute and relative format for eliciting tie frequency.

See Figure 4.4 in Chapter 4 for examples. 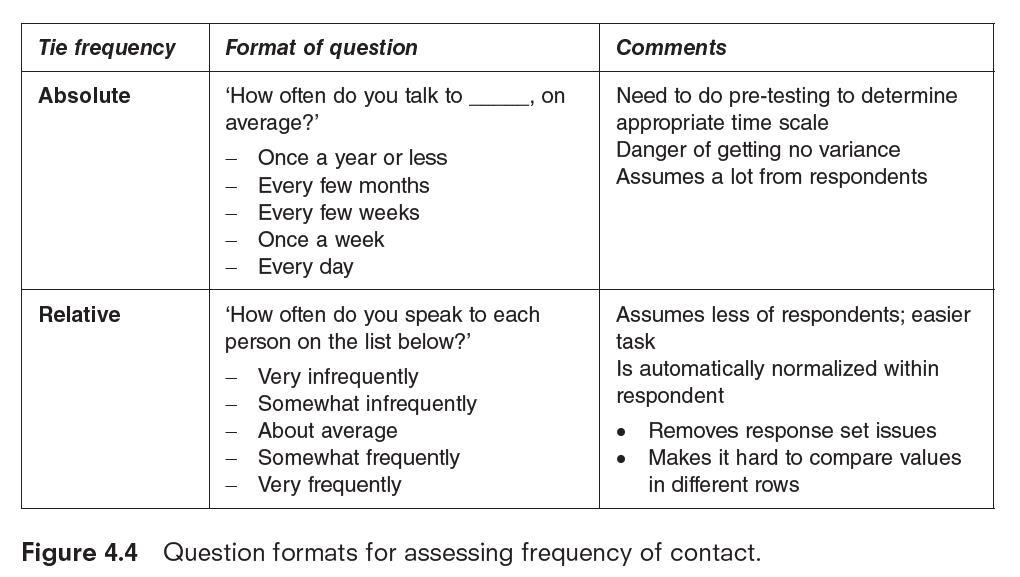 5. Jennifer studies organizational behavior and is interested in understanding the relationship between frequency of interaction among employees in a corporate headquarters with 355 employees and their attitudes about corporate culture. She wants to use a closed-ended multigrid question format in her study. Discuss the advantages and disadvantages of this approach in this case, and provide some suggestions of ways to reduce respondent burden.

Having a list of 355 employees across multiple network questions (in the grid) could prove to be a daunting task for any respondent. If the corporate headquarters is divided up into functional units (e.g., shipping, IT, legal department) this might be a way of reducing respondent burden. The list of employees can be aggregated into functional units and the network questions can initially be directed to the functional unit and then employees within units. So for example, if one of the network questions involves advice seeking, the initial question could be ‘Do you seek work advice from anyone in “Shipping”?’ If they don’t seek advice from anyone in shipping move on to the next unit. If they do, then provide the list for people in that unit, and so on.