1. For the next series of exercises data from a study of the network dynamics of polar research stations will be used. The data represent the social networks of crews at the Amundsen Scott South Pole station at the beginning of the Austral winter and at the end of the winter in terms of reports of social interactions (see Johnson et al., 2003 for a description). A comparison of the characteristics of the social networks of the crew at the beginning and end of the winter at the network level will help inform an understanding of the evolution of network structure over the course of the long winter (March to October). The social networks of the crew in March and October (dichotomized network of strong relations) are shown in Figures 9.9 and 9.10. 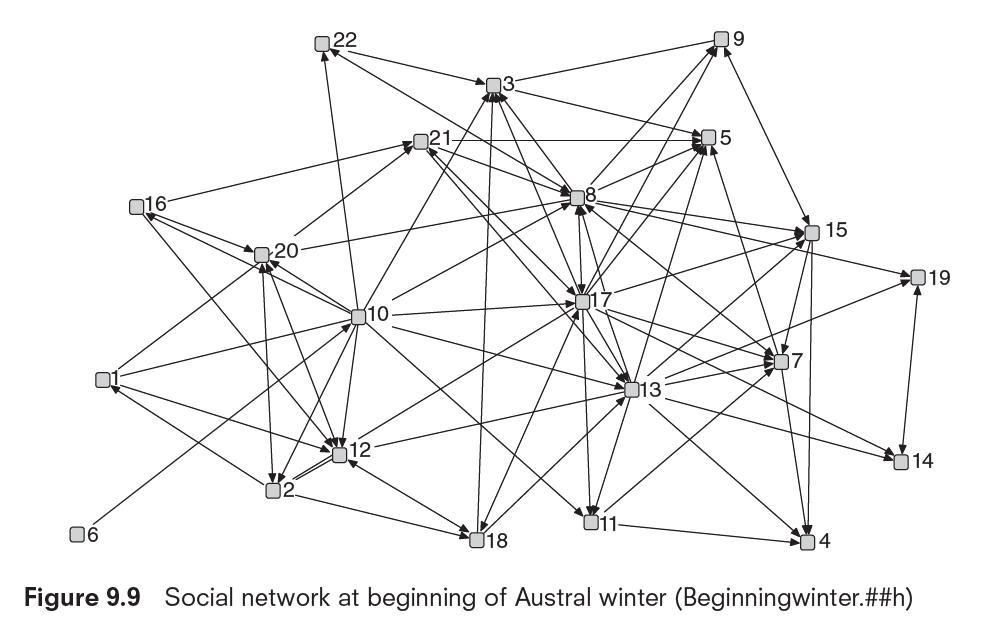 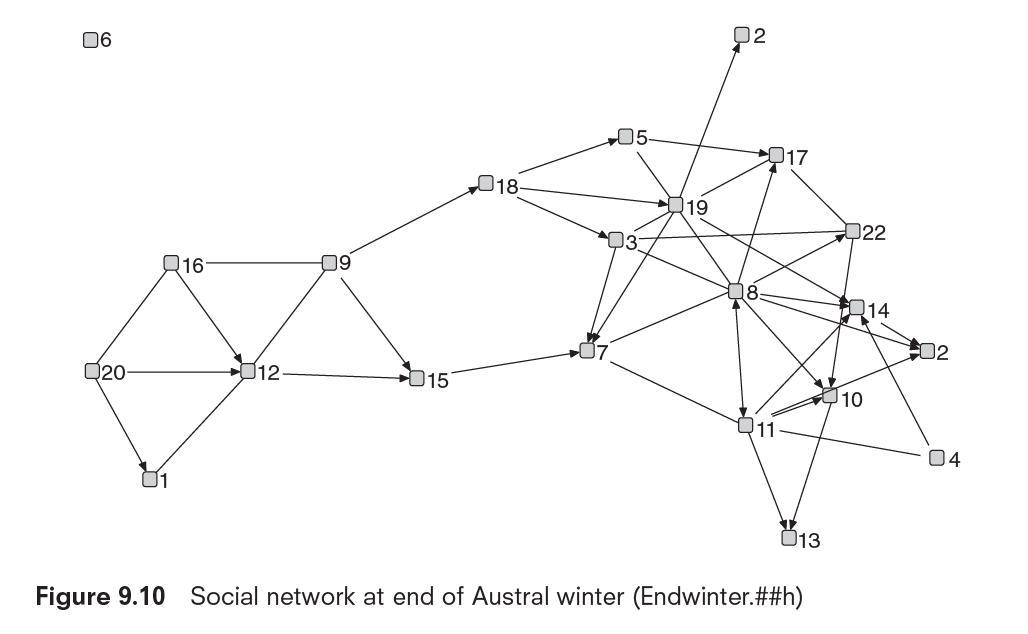 a. One classic measure of network level cohesion is density. Using UCINET determine the densities of the social network at both the beginning and end of the winter (this will require two separate runs). In UCINET go to Network|Cohesion|Density|Density Overall and upload each of the data files and run. What might you conclude about the differences in densities over time?

It is clear that density is declining over time. This is also evident from a visual comparison of the two networks.

b. Another network level measure of cohesion is transitivity. Similar to the density problem above, do an analysis of the changes in transitivity using UCINET for each network. Go to Network|Cohesion|Transitivity and upload the matrix and click OK. Do a separate run for each. How does transitivity change over the course of the winter?

Like density, transitivity is also declining over the course of the Austral winter, further evidence of a decline in network cohesion.

c. Given this is a directed network we can also do a full triad census. For each network in UCINET go to Network|Triad Census and load the network file and click OK (do a run for each network). Be sure to save each of the ucinetlog files for comparison. In comparing the networks how did the number of empty and complete subgraphs change in the network over the winter? 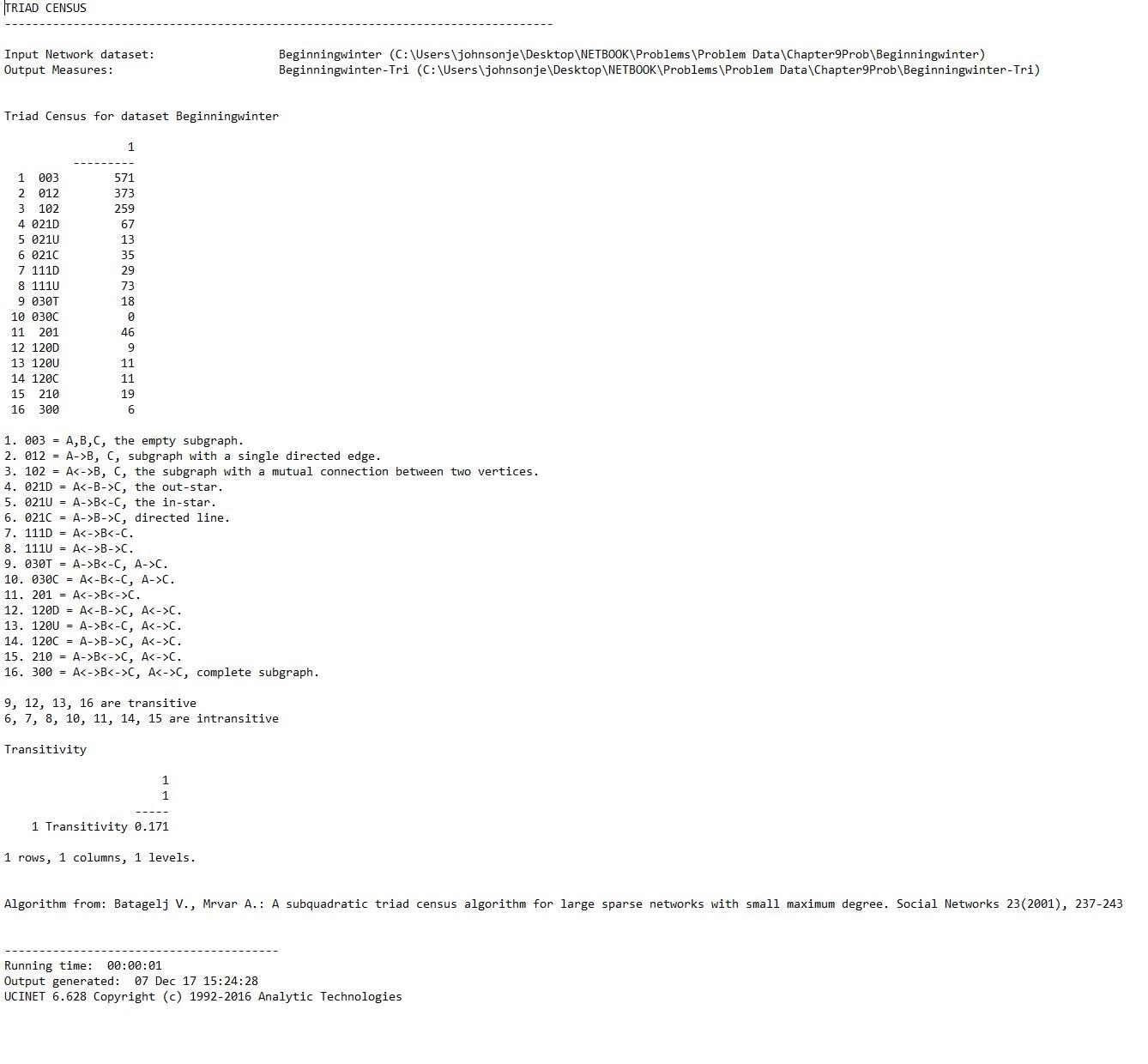 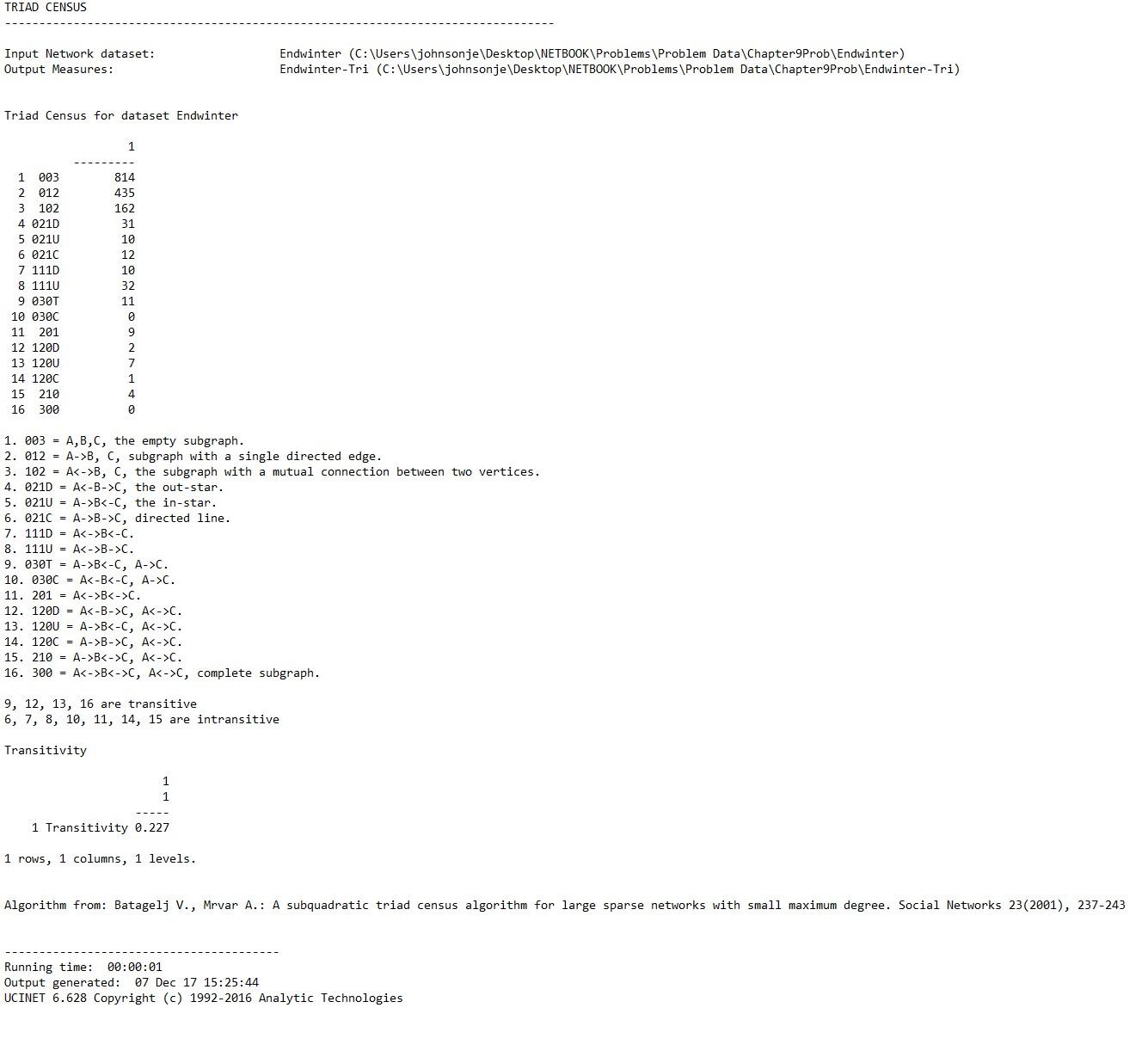 d. Another measure of network cohesion is the clustering coefficient. For each network in UCINET go to Network|Cohesion|Clustering Coefficient and input the networks (be sure to save the ucinetlog files for comparison). How do the networks compare?

As in the other measures of cohesion, the clustering coefficient declined over the course of the winter.

Clustering coefficient for beginning of winter 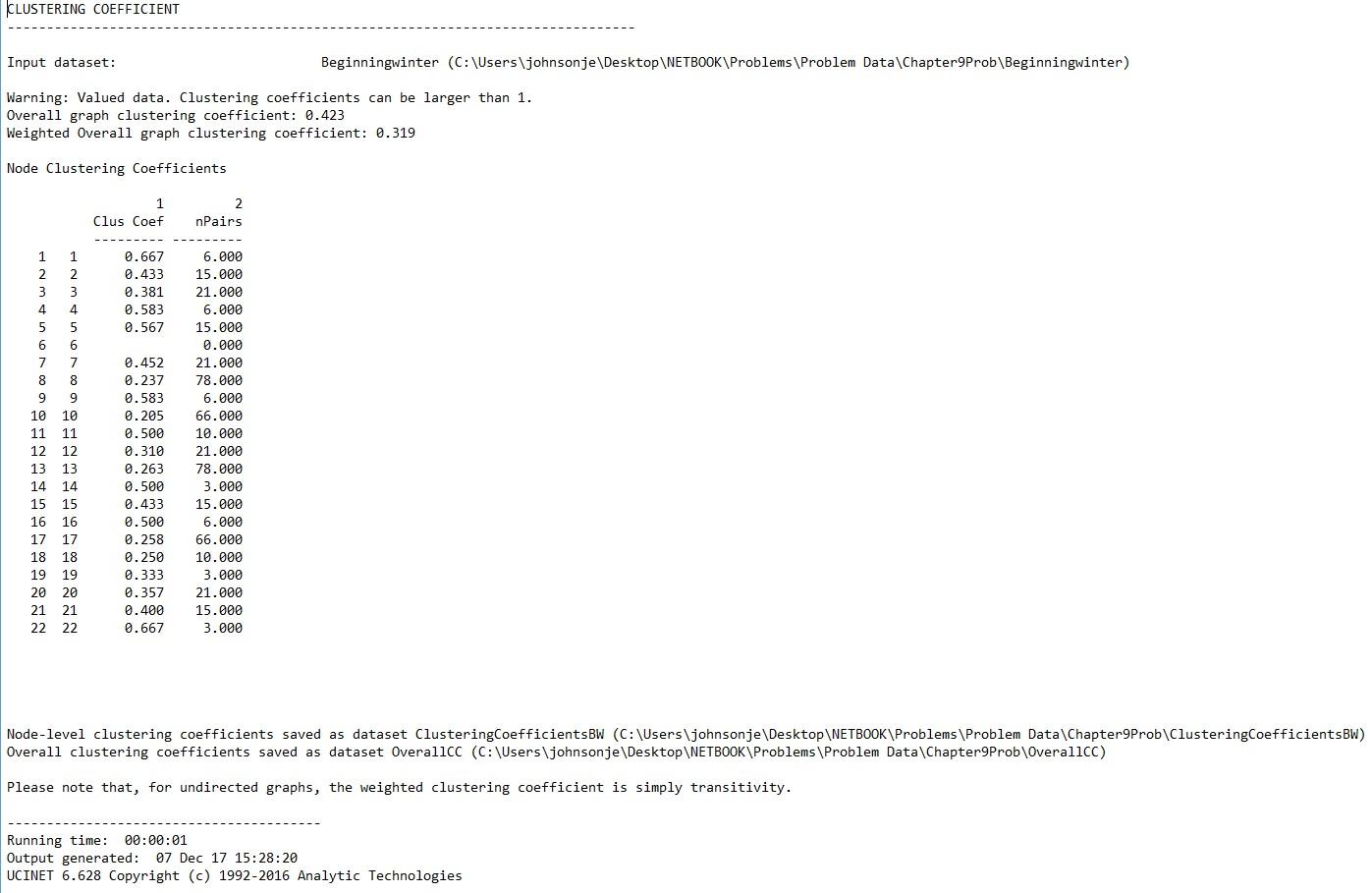 Clustering coefficient for end of winter 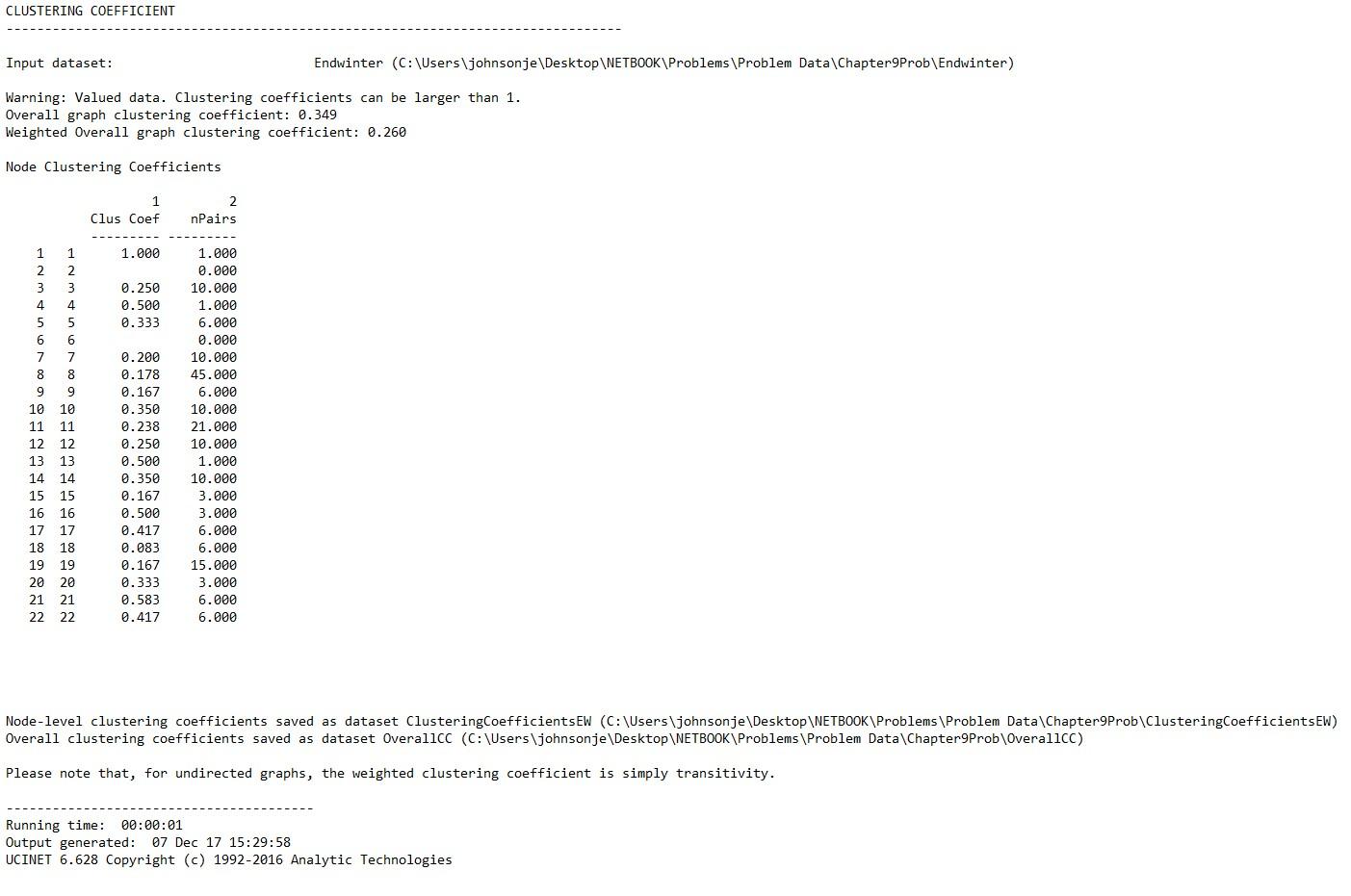 e. Another important measure of overall cohesion is reciprocity. For each network in UCINET go to Network|Cohesion|Reciprocity and input the networks. Using the default method of Hybrid click OK (be sure to save the log files). Has reciprocity increased or decreased over the winter?

Not surprisingly, the amount of reciprocal relations declined over the winter reflecting discord among members of the network.

Reciprocity for beginning of winter 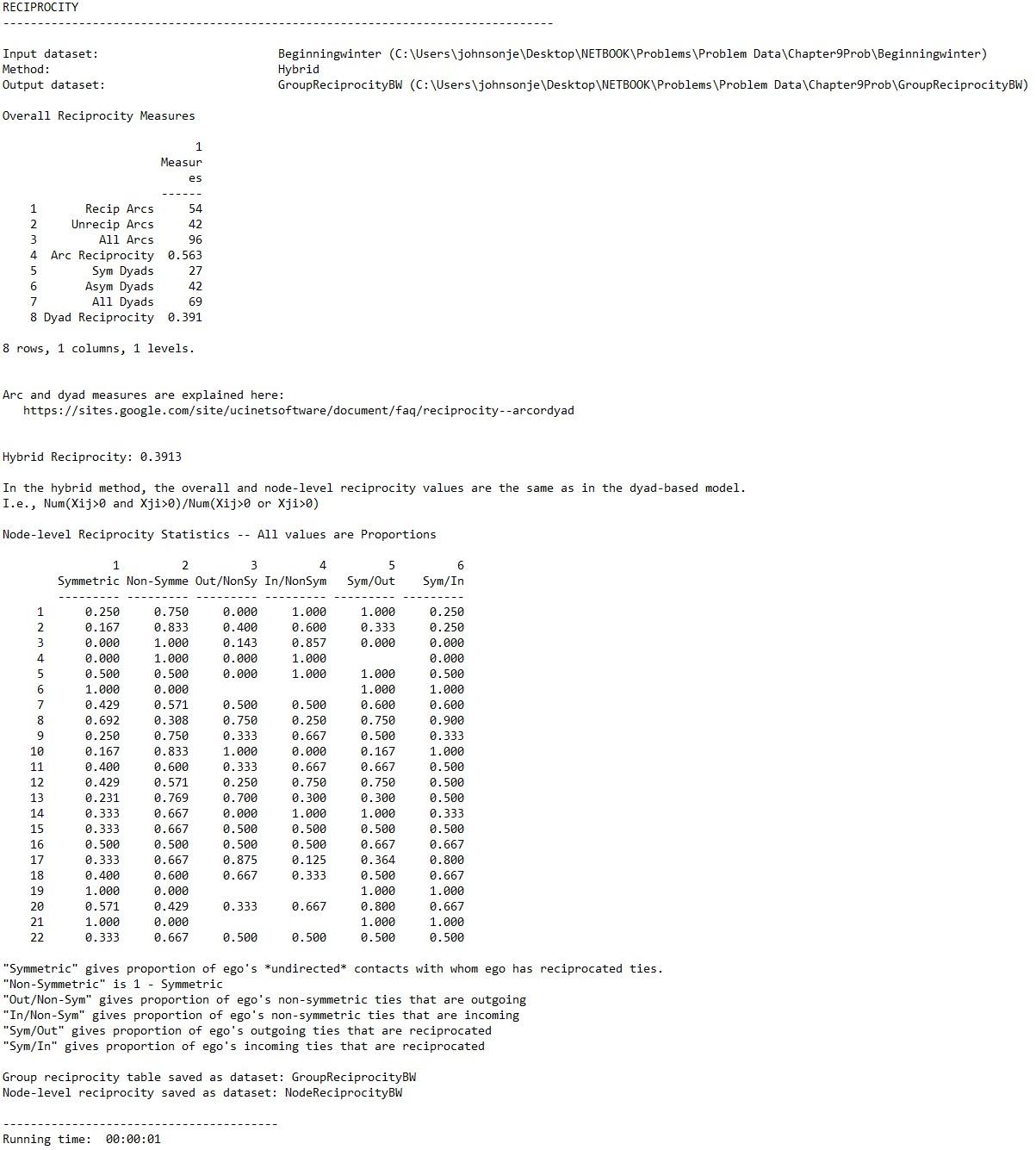 Reciprocity for end of winter 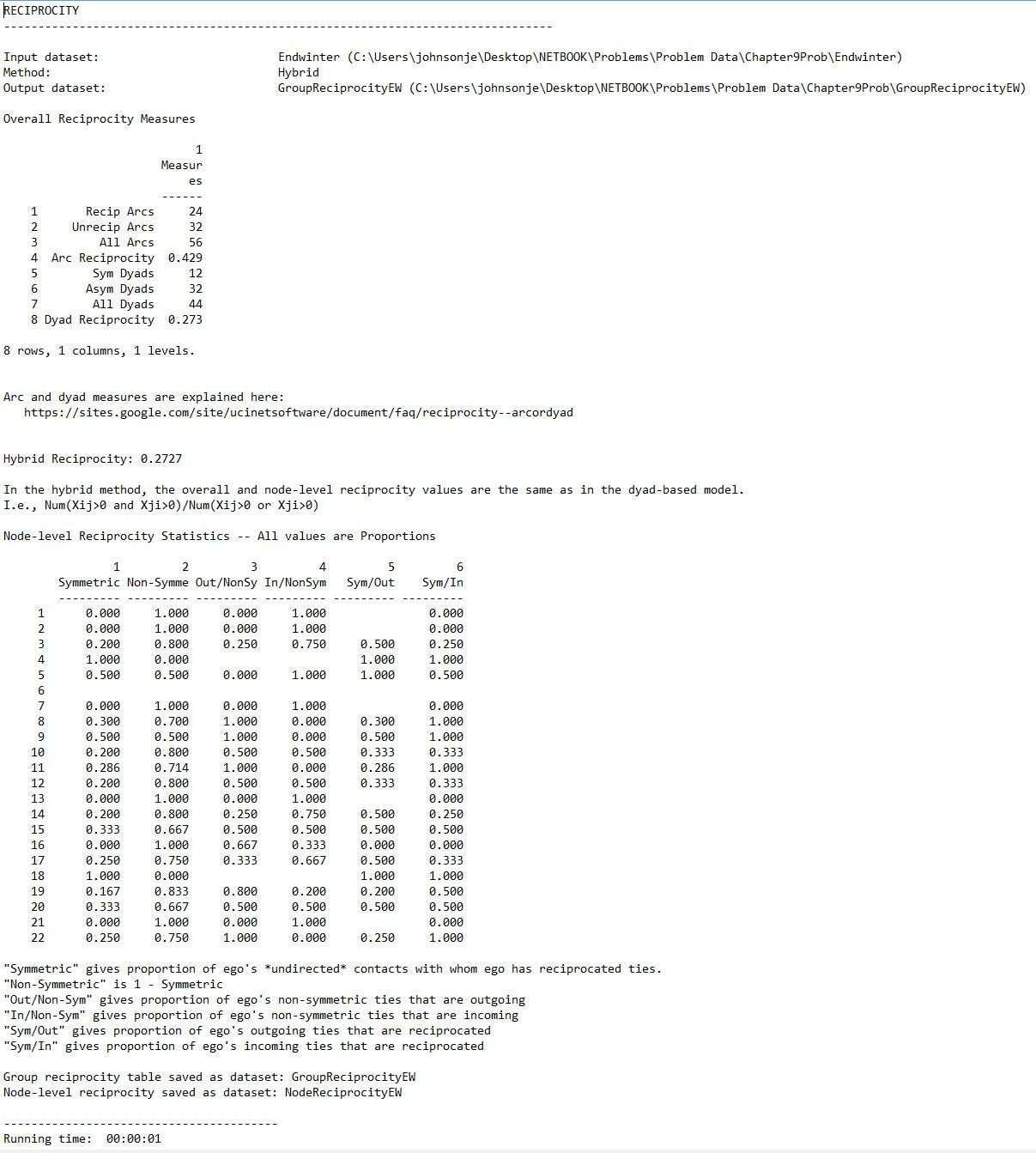 All the various measures point to declines in cohesion over the course of the winter. This also corresponded with increasing group discord and inter-clique conflicts over the winter (see Johnson, Boster and Palinkas (2003) for a discussion of the network dynamics).