a. In a coeducational summer camp for teens, researchers want to know the extent to which attitudes about religion play a role in the formation of friendships within the first week of coming to camp.

b. An anthropologist is interested in studying the relationship between Canadian Inuit hunters’ structural position in a hunting advice network, as measured by indegree centrality, and their hunting success.

c. A sports psychologist is interested in studying the relationship between basketball team cohesion off the court and number of regular season wins among a sample of 30 US universities.

d. A political scientist hypothesizes a relationship between the presence of international trade relations and the formation of bilateral defense agreements.

e. An agricultural extension researcher proposes that time of adoption of a new fertilizer among Iowa corn farmers is related to the structural centrality of farmers in a communication network.

f. An organizational sociologist hypothesizes that the more regional sales teams have a centralized information-sharing network the greater the team’s overall sales.

g. An educational researcher is interested in how the political views of incoming freshmen at a large university affect the formation of friendship ties over the first semester.

h. A network researcher is interested in the relationship between astronaut knowledge of mission network structure and psychological well-being over the course of a 30-day simulated mission.

i. A management researcher advocates that highly centralized networks are more efficient at a variety of task settings than distributed networks, and designs an experiment to test this hypothesis.

b. To what extent is smoking behavior among adolescents affected by their social networks?

Answer: Could be either but personal networks may be more appropriate

c. How much do voting patterns in a state legislature conform to political party affiliation?

e. Does the network structural position of a manger in a financial firm impact that manager’s performance?

f. To what extent is toothpaste brand selection affected by consumers’ social networks?

g. To what extent is the social network structure at a commercial fish camp in Canada influenced by ethnicity?

h. What factors influence the development of cooperative social relations among activists in an environmental social movement?

3. Produce a hypothetical social network study example for each of the three major types of research designs: experimental, quasi-experimental and observational. For each example, identify the independent and dependent variables.

Answer: These will depend on the hypothetical studies produced. See Tables 3.1 and 3.2

4. For the hypothetical observational design presented in problem 3 above, is the design cross-sectional, retrospective, or prospective? What are the advantages and disadvantages of each in the study of social networks? 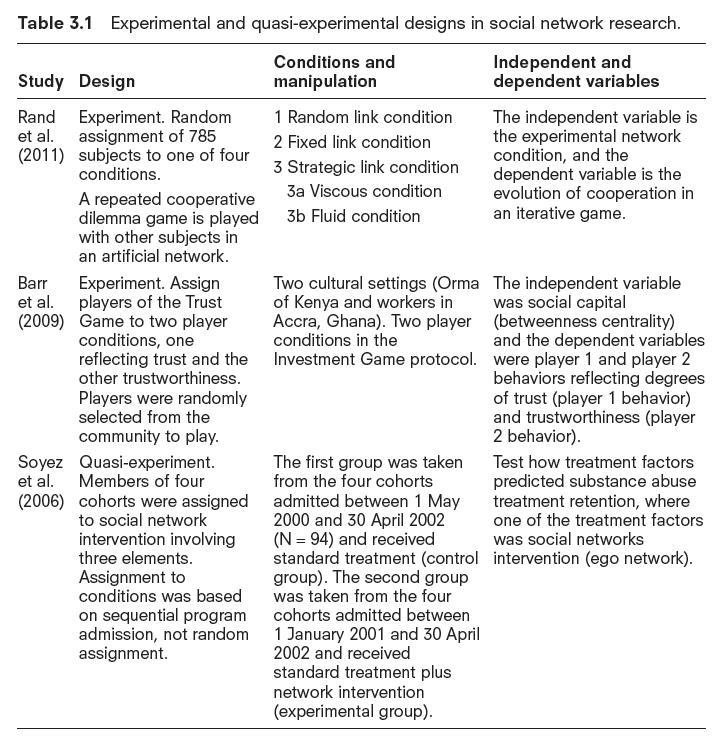 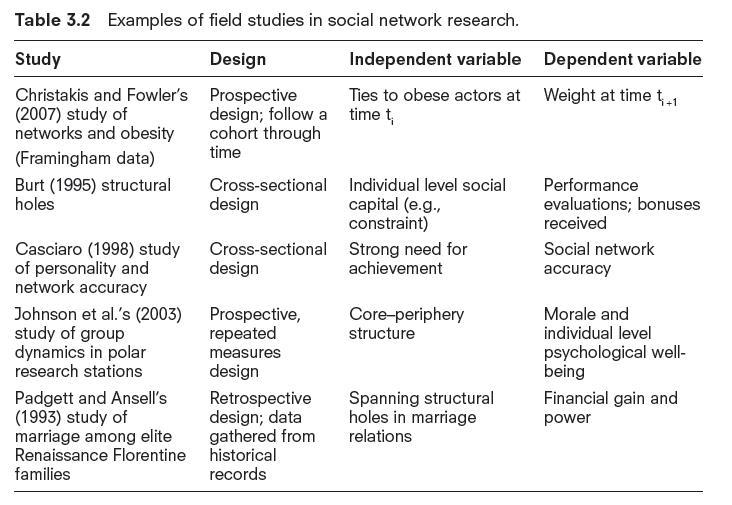 (NOTE: These are just one of many possible responses to the examples).

a. A study of fraternities at a medium-sized Midwestern university

Answer: A researcher could select a large fraternity and bound the network by its membership

b. The study of an informal gay group in an urban neighborhood

Answer: Depending on the size of the group, all members could be studied based on group member’s determination of membership. This could involve a free-listing of member’s names and bounding the network by the most frequently mentioned names

c. The network relations among active hunters in a small village in the Amazon

Answer: Elicit a list of NGOs working in the area through interviews with known NGO employees. The list can help in bounding the network

e. Food-sharing networks in a village in Central Asia

Answer: Since the village is the focus, depending on the size of the village all households could be included in the network

f. The political network of community activists in a moderate sized city

Answer: Elicit from known community activists ‘other politically active people they know of in the city.’ This list can then be used to determine who is in or out of the whole network study

There are many ways to reduce non-response but the following are key:

7. What are some of the key ethical concerns in social network research as opposed to other types of more traditional research, such as classical social surveys?

The primary issue is one of anonymity. Where in surveys both confidentiality and anonymity can be achieved, anonymity is more problematic in social network studies. As the chapter notes:

‘Network research poses different ethical challenges from those of other kinds of social research, particularly in whole-network research designs. In whole network designs, it is impossible to collect the data anonymously. Personal-network research designs can be anonymous, both with respect to the respondent and the people they mention (e.g., they can use nicknames). But for all practical purposes, full network designs require that the respondent identify themselves, which means the researcher can only offer confidentiality. This makes it imperative that the researcher make it clear to the respondent who will see the raw data what can reasonably be predicted to happen to the respondent as a result of an accidental breach of confidentiality.’ (p. 46)