tens, ones, digit, two-digit number, in order, between

Set of pre-prepared ‘selection’ cards and one blank card in a bag, e.g. 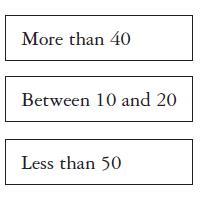 Support
Number lines from 0 to 100 or hundred squares could be available for children to use and check against.

Challenge
What could you write on a selection card that would mean:

Ask the children to work in pairs. Provide them with a sequence of numbers (of balloons) which can be made by adding/removing either tens or ones, e.g. 23 balloons, 27 balloons, 47 balloons, 17 balloons, 12 balloons, 52 balloons, etc.

Explain that there is a difficult customer who keeps changing his mind about how many balloons he wants. Ask them to pick the first number (e.g. 23) and each draw the correct number of packets of balloons and individual balloons. After they have checked each other’s drawings they look at the next one on the list (e.g. 27). The customer has changed his mind and now wants a different number of balloons. How can they change their drawing to represent 27? The children must explain to each other what they have done and why, e.g ‘I already had 20 balloons and three balloons, which is 23, so I needed to add another four balloons to give me 27’.

This activity could be recorded in their books or on an activity sheet, with the different numbers shown. This means that changes made are recorded. Try to encourage the children to decide how they might record the changes so that anyone reading their work would be able to follow what they had done.

Whilst they are working, ask children questions such as these. You might want to focus on those children whose level of understanding you are unsure about. These might be children you think are unclear or children whose thinking you can extend.
Can you explain to my why the picture you’ve drawn shows 43 balloons?
This picture shows three bags and four balloons. Would this be right for a customer who asked for 43 balloons? Why?
This picture shows 43 balloons. If a customer wanted 63 balloons, how many more do you need to give the customer?
What if a customer wanted 48 balloons but Mr Bumble only has two packets left but lots of single balloons? Can he give the customer what he has asked for? How could he do this? Could we write a number sentence to show what this would look like?

There are some common errors and misconceptions to be aware of when teaching place value.

The ‘teens’ numbers can be particularly problematic for children. One potential issue is that some of the teens numbers can sound very similar to the tens numbers and so, for example, children may struggle to distinguish between numbers such as forty and fourteen. It is therefore important that both you and the children are very clear and precise when pronouncing numbers.

Recording numbers can also lead to misconceptions and again it is the ‘teens’ numbers that can cause difficulty. For most two-digit numbers we refer to the tens digit first when saying and recording the number; however, when we say a ‘teens’ number we refer to the ones digit first. It is therefore not uncommon for children to record numbers such as ‘fourteen’ as 41. Children also need to appreciate the compact way in which we write all numbers. To some children it is completely logical to write twenty-five as 205 as this matches the way we say the number.

Make sure that you never read a number by just sayings its digits. For example, the number 25 should always be read as ‘twenty-five’ and not ‘two five’.

Ways the lesson could be adapted

The school hall could be used for the starter instead of the playground (if another class is using it for PE you might be able to have the first few minutes while they get changed).

Other equipment and contexts could be used instead of the balloons. You could use: 10p and 1p coins to make given amounts;

art straws tied together in bundles of ten;
everyday items that come in packs of ten;

structured place value equipment such as place value (arrow) cards and tens and ones materials.