When news organizations make mistakes, it’s imperative that they take steps to correct the errors. The audience is much more likely to forgive journalists who admit it when they are wrong.

ESPN has been widely credited for having one of the most comprehensive multimedia corrections policies in journalism. Take a moment to review the policy which is clearly posted on the ESPN site. 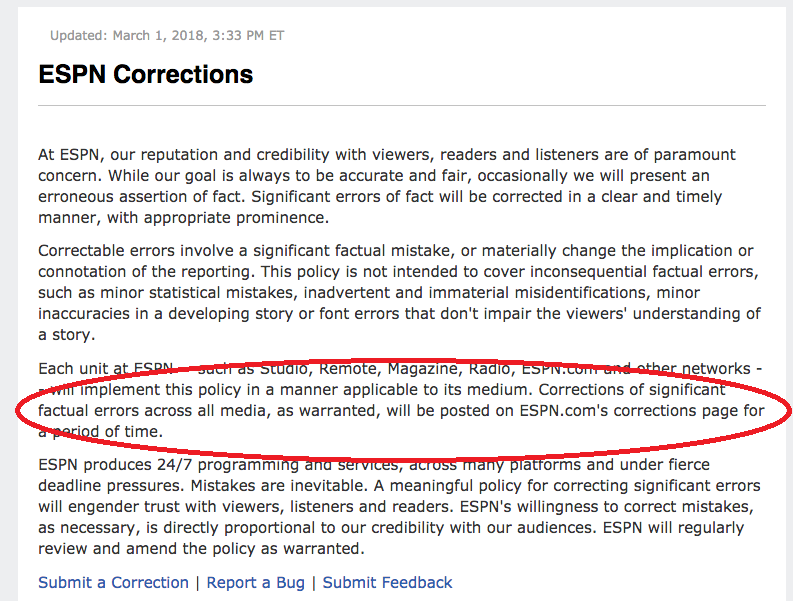 Now, on your blog, answer the following questions:

There are times when news organizations make the choice to post potentially disturbing content online that they will not broadcast or publish in print.

For the purposes of this assignment, assume that the U.S. government has released a series of graphic photographs that show the brutality done to several U.S. prisoners of war. Your news organization has decided not to air the pictures in a newscast, but you will publish them online behind a link.

Choose one of the two writing assignments to complete on your blog and submit to your instructor.

Making a good ethical decision often depends on asking the right questions, rather than discovering the right answer. Your goal is to think through ethical challenges in such a way that you can justify your decisions to yourself, your newsroom, and your audience. Not everyone may agree with your choices, but at the very least you will be able to show anyone who asks, have you thought carefully about your actions?

The following case studies are based on real-life challenges that many journalists have faced. They are intended to be discussed in a group setting because the best ethical decisions are rarely made without significant input from others. However, you can choose to walk through the material on your own and use our questions as a guide to help you think about perspectives that may be different from your own.

After you have answered the questions, you will be given an opportunity to view what one journalism ethicist had to say about these issues. Fred Brown, columnist and retired Capitol bureau chief for The Denver Post, is a former co-chair of the Ethics Committee for the Society of Professional Journalists.

Case Study #1: A simple request? Where do journalists draw the line between creativity and staging?

Some of the best ethical discussions often occur when a reporter and photojournalist are discussing a story. Here are the words of a reporter describing one of those discussions and asking what you think about the issue:

The other day I was discussing a story that I'll be doing in a few months with the photographer. It will be a human interest/feature type story that will profile one family and their struggle to get ahead. I mentioned to him that I wanted to get a lot of b-roll of the family at home ... I specifically mentioned (as an example) that I wanted to see the wife and/or husband cooking, watching TV, etc. The photographer said to me, "I'll only shoot them cooking if that's what they are doing when we are there. If we ask them to cook it would be staging something and I am not going to do that."

"If they have an appointment with us to be interviewed then I sincerely doubt they will be cooking, playing basketball or watching TV when we are there. Is it wrong to ask the family to give us a sample of their activities so that we can get it on tape? (Obviously if they NEVER cook or play sports then I wouldn't ask them to do it.)”

Case Study #1: A simple request? Where do journalists draw the line between creativity and staging?

Staging photographs or re-enacting scenes is always ethically questionable, but in this case it's hardly as objectionable as the photographer seems to feel it is. The reporter is right: If the family has made an appointment to be interviewed, they're going to be anticipating their big moment, not casually going about their usual business. The best way to approach this may be to give enough time to the interview and photo session that you can ask family members to just go ahead and do what they'd normally do at this time. Or, since this appears to be a story with a longer time frame, the reporter-photographer team always could ask to come back when they're cooking, or playing with the dog, or using their meager savings for a rare visit to an amusement park.

As in many ethical questions, there are degrees of "staging." To re-enact an official's meeting with a prostitute, for instance, without labeling it as a re-enactment, is the worst sort of "staging," and is definitely unethical.

It would be equally unethical to ask a firefighter, for example, to walk out of a burning building a second time so you can get a shot that you missed. Those are extreme examples, and very damaging to the public's perception of news media reliability and responsibility. It's certainly less offensive to ask someone to put on a show of cooking, or playing touch football, or whatever--unless, as the reporter says, they NEVER do those things in real life. I'm with the reporter on this one; the photographer's position is too rigid.

Case Study #2: How far should you go? When is it OK to break the rules to get a good story?

First word came in over the radio … police are sealing off a residential neighborhood near a local university where a construction crew has uncovered some strange-looking barrels. You're the only available crew, but you're way on the other side of town. The desk gets you moving, and as you drive toward the scene the level of urgency builds on the two-way. The scanner is saying that live explosives have been found as well, and the barrels are definitely dangerous. You start getting pressure to move faster. Once you arrive, you can see there's no way in to the area. But again, there is pressure from the desk. One manager tells you to take a back way so you can get closer, close enough to get a decent shot of what's been found.

Case Study #2: How far should you go? When is it OK to break the rules to get a good story?

This case study shows why telephoto lenses were invented. Taking pictures of a bunch of barrels doesn't make very compelling video, unless, of course, there's an explosion. And in that case, if you're too close, you're liable not to get anything but ruined equipment and serious injuries.

Speeding to get to the scene of this discovery is a comparatively minor ethical transgression--unless you put others at risk by running lights or driving recklessly, or if you get pulled over, which prevents you from getting the story.

Concealing your identity isn't going to help anything. If you can't get through the police cordon as a reporter, you're certainly not going to get through as merely a curious onlooker. And pretending to be an explosives expert or even a neighborhood resident definitely pushes the ethical envelope.

The amount of risk you incur should be proportional to the importance of the story. In this case, getting too close to an inert bunch of barrels hardly seems worth it. It's more informative to interview experts, including those on the scene, about what's in the barrels and what effect it might have.

The stakeholders here include the police, who typically err on the side of being overly cautious; nearby residents, who are likely to be your most dedicated audience since whatever happens will directly impact them; and the rest of your viewers or readers, whose stake in this story isn't nearly as large unless the barrels contain some easily dispersed and terribly toxic material such as nerve gas. If that's the case, it's more important to talk to authoritative sources than it is to get tape of a bunch of barrels.

Case Study #3: Are we intruding? What is our responsibility when dealing with stories where people may be grieving?

A high school junior has been found raped and murdered in your town. Police have just disclosed her name, and you are assigned to do a profile/sidebar. The desk suggests you contact some of her fellow students while the desk tries to reach the parents. When you arrive at the high school, it's open lunch period. Kids are streaming toward fast-food restaurants, off campus, and the competition is just pulling up. You hurry over to a group of students, rolling tape and asking for reactions. They hadn't heard the news. It turns out that none of the kids knew about it until the cameras showed up. Girls are sobbing and holding on to each other, overcome with grief.

Case Study #3: Are we intruding? What is our responsibility when dealing with stories where people may be grieving?

This is a tough one. Ideally, police would have notified the principal of the victim's high school right after they notified the parents, to give the school a chance to break the news to students. But sometimes the timing of events doesn't allow that--such as here, where the news breaks at the lunch hour. And, with the competition on the scene and noon newscasts possibly in progress, the pressure to get this very moving element of the story is high indeed.

The shock could have been avoided, or at least muted, if the desk had called the school to find out if students had been told of the crime. That could have been done while the news crews were on their way to the school. As the first to tell the victim's fellow students of her fate, the news crews unethically make themselves an obtrusive part of the story. People who are grieving need to be approached with great sensitivity; wait to interview them until they've been told.

This is an example where the reporters and photographers make themselves major stakeholders by showing the sort of insensitivity the public deplores. Other stakeholders, in addition to the victim's family, are the school and the students who have been unnecessarily traumatized by getting the news in this way. Is there another way to tell this story? One way is to wait until authorities have had a chance to tell students. Until then, just shoot the school and the students without breaking the news to them. Get the reaction later, after they've been told.