Josh Hinkle of KXAN-TV in Austin, Texas, often reports for television, print, and the web. His long-form TV story “Fallen,” about the killings of peace officers across the state, won a Sigma Delta Chi award for best television documentary from the Society of Professional Journalists. But his coverage didn’t end there. Learn how he found and reported the story, watch the video, look through the online package, and read his article in the Texas Tribune. We will have questions for you afterward. 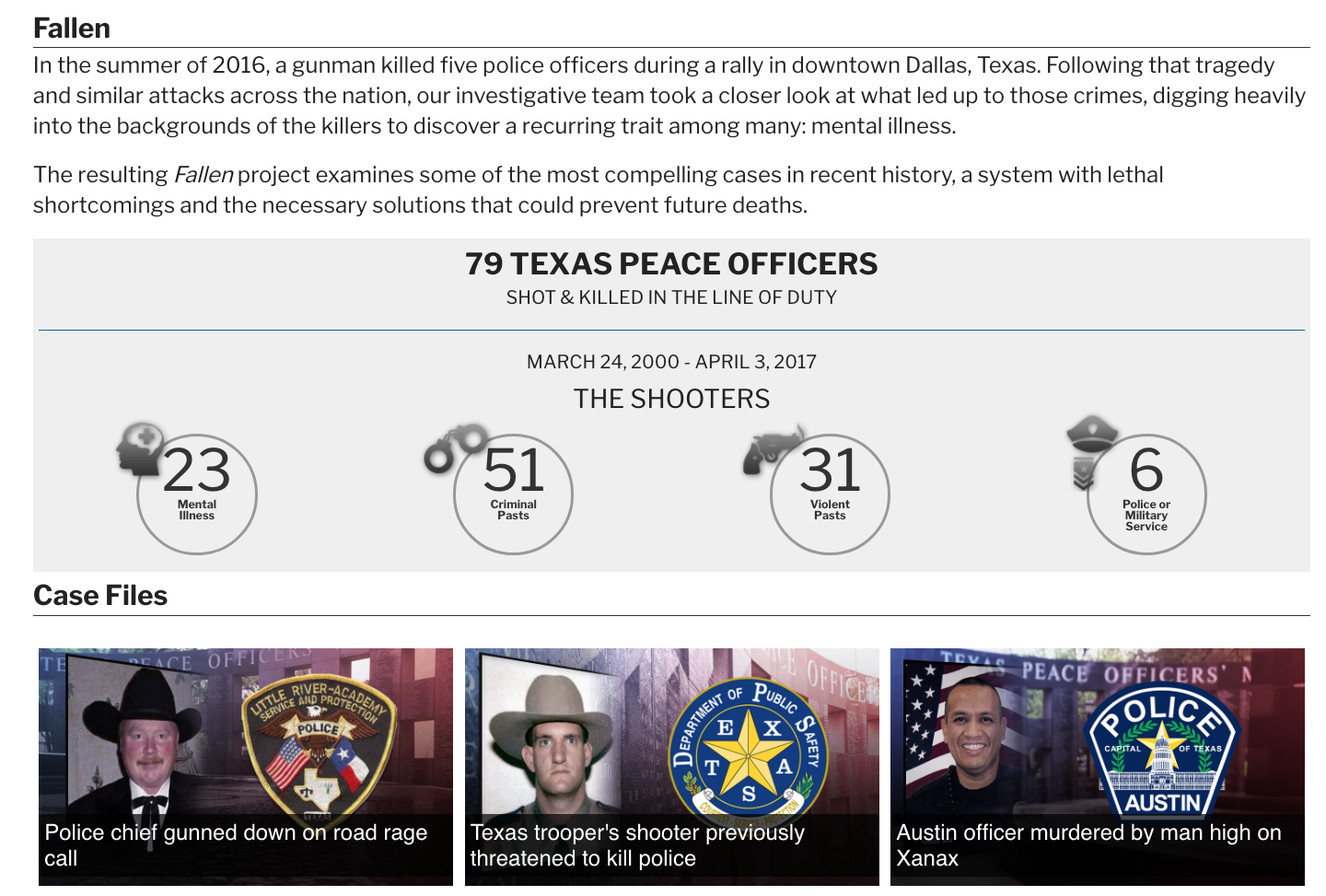 It started with the murder of five police officers in Dallas, the latest in a string of police killings nationwide. “We didn't set out to tell a story about racism, firearms or police shooting other people,” Hinkle wrote. “Those were already out there. Actually, our story started with two questions on the other side of those conversations: what do these killers have in common, and could the answer to that question help prevent more deaths?”

Hinkle and his investigative team spent 10 months looking into the killings of peace officers across Texas. Using the state public information act, the station obtained court records and police reports on 79 deadly shootings to produce Fallen.

One key finding was that more than a quarter of all peace officers killed in a 17-year period died at the hands of someone with mental illness. The investigation culminated in a television series that aired on three successive nights. Online, the three TV stories were loaded into a special player on Day 1 so users could “binge watch” them all.

Fallen | The Special from Josh Hinkle on Vimeo.

The web version of Fallen included graphics and six additional videos, as well as links to organizations that provide resources to people with mental illness and their families.

Hinkle and producer David Barer also wrote a long-form text version of the story that was published by a partner news organization, the Texas Tribune.

Questions--Taking Advantage of a Medium’s Strengths

One way to find stories and report them with depth and context is to analyze data. Take a look at Chapter 4 to review how journalists use data. In this exercise, you'll practice basic computer-assisted reporting (CAR) skills to analyze a data set and develop story ideas.

Download this FBI data set (see file) of arrest rates to your desktop and open it with Microsoft Excel or convert it to a similar spreadsheet program.

At the bottom of the spreadsheet, you will see four tabs. Click on the one labeled "drug abuse violations.” What do you notice about the data? (If you're confused, read the introduction this FBI report).

Click the tab at the bottom of the spreadsheet labeled "explanation" to see why the totals don’t match.

As you looked at the data, you may have noticed some striking changes over time. But you can't base a story on an impression. You'll need to be able to say precisely how much the numbers changed over time, and to do that you have to calculate percent change.

So, add a row at the bottom of the data set and label it "percent change" in the year column. Now create a formula to calculate the percent change from 1993 to 2001 for each column of numbers. (Never done it or can't remember how? Here's a tip sheet from the Education Writers Association for creating formulas in Excel).

Format the percent change cells to percentage, with two decimals. Save the new data set with a new name, drugchange.xls, for example. At the end of this exercise, you will upload the file.

Now what do you notice? Think about a main story you could write based on the data and two possible sidebar stories.

This story is one of an 11-part series by WCNC-TV in Charlotte, N.C., that won a duPont–Columbia Silver Baton Award in 2005. The series led to Medicaid policy changes in North Carolina and Colorado. As you watch the story, notice how it’s structured and pay attention to the use of elements other than video.

Now, answer the following questions about this story: