Chapter 13 discusses interrogation of data that can happen at varied levels and at many moments during analysis. Already in Chapter 6 we referred to Text search tools where the content is explored. Interrogation can also happen in terms of coding work you have previously achieved. You might wish to discover relationships between codes which co-occur in some way in the data or need to compare them across subsets of data (indicated by the application of variables or attributes to data). Types of queries vary from simple to complicated tasks; summarized, charted information where the results are already available in the background is available in some software.

Incremental and iterative nature of queries

INTRODUCTION TO QUERIES and CHARTS

It is not possible in this section to give you a full guide to the Query tool and charts as ways to interrogate data, but instead will provide ways to get you started, detailing the most commonly used types of queries, providing general information relevant in some way or other to all queries. Use the Query tool in simple ways to start until you are confident with it and then you can increase the complexity of your queries. WE have already covered the use of Word Frequency and text search queries in Chapter 6 sections.

The Find tool is for finding project items which are characterized in certain ways. Outcomes from Finds can become Search Folders (see Collections). The Query tool is for answering questions about the content of those items. Queries look for source content with specified features – words in the text, coding, attributes of a case, or any combination of those, to be built up with a range of logical (Boolean) and location operators. The Query tool offers more subtle ways of asking questions; more complex ways of viewing, saving, and using results; and the ability to save a query so you can re-run it through different data or later on without reconstructing it. Outcomes of each: where Find gives you a list of project items as an answer, Queries provide the actual content requested and new nodes can be created from the results.

We cover Coding Queries and Matrix Coding queries in some detail below –
Other queries include: Coding Comparison, useful for teams produces a Coder Inter-agreement measured with Cohen’s Kappa and can be useful to find similarities, differences and interesting findings for further analysis. The Compound Query allows you to create a combined text search and coding query, the Group query – allows you to select for instance pairs of documents to compare coding. 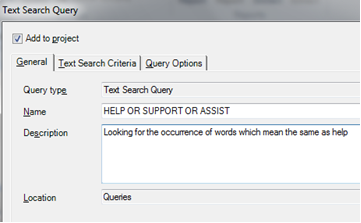 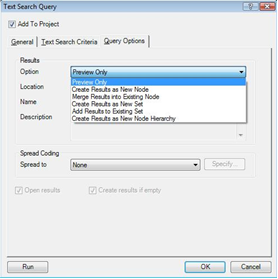 NOTE: There are limitless ways of performing these queries, depending on the items and the operators used. We can only show two examples. but given that the General and Query Results tabs are pretty much the same for each, the screenshots below are of the relevant Search Criteria tab only.

Remember that all queries can be scoped to one or several selected files, a folder of files a Set of files or all sources (default). This can take place in the In bar of every query. Instead of agreeing to All Sources – use Selected items or Selected Folders

Coding queries are probably the most frequently run query for most researchers. This query is very customizable and allows you infinite ways to examine how various codes have been used in your project. For this reason we only provide two sample queries – and several possible ways to vary outcomes.

TIP: get into the habit of Adding to project (top left) to name and save the query – this saves the settings, i.e. the way you built the query – so that later you can re-run it or change the settings (but only temporarily) to experiment.

There are two important tabs in the dialogue box – Simple and Advanced.

Simple means you can only ask for data coded by one node or by one attribute value – though you can add a second dimension by varying the scope (from All Sources, to Selected items or Selected folders).

Advanced means you can combine several different items in various ways (see below). 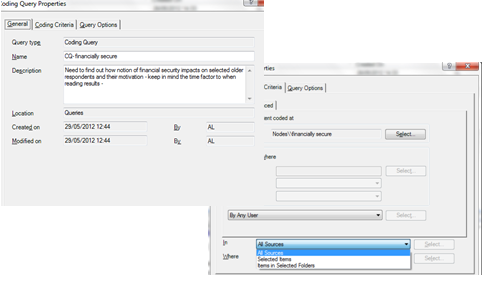 So…instead of running the query.

In …All Sources click on drop down arrow to either 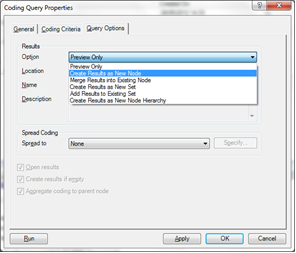 In general, it is probably more common to use the Advanced tab since that allows more user flexibility. In this example (below), we have chosen to set up a query to determine what sections of source content have been coded to both the “Motivation” and the “Financially secure” nodes. 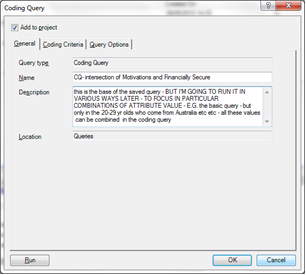 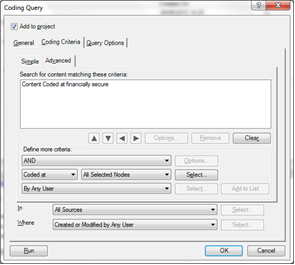 TIP: Experiment with queries you know the answer to in order to check that you are building queries correctly!

A matrix coding query is as if you were running multiple coding queries at once – usually you will be setting out to achieve one of several options:

The result will be a table where each cell represents the answer to a single query of the row and column – the initial view will be based on frequency – this can be varied – can be counting how many sources feature at all at a node, or number of coded passages (references), or number of words coded, or varied percentages etc. Each cell can be ‘opened’ to reveal relevant qualitative content. If the results of query is saved, you can return to the snapshot of the find over and over again. If you Save the ‘query’ i.e. Add to project you can re-run the query over and over again by double clicking on it. 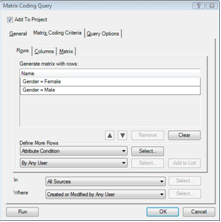 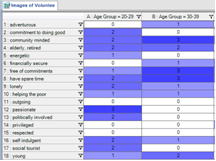 This is all about standing back from the data while interrogating (see above after the results of a matrix coding query). A visual, but potentially quantitative look at who much coding has been applied in various places in your data. Charts can be created to show a variety of different things:

Some additional thoughts on charts:

Cluster analyses allow a particular quantitative approach to the measurement and various visualisations of the relative associations of e.g. codes with other codes on the basis of word similarity or proximity.

Since Charts and Queries are always produced at a point in time, remember that there is a purpose in saving snapshots of the results – but also

With queries, the results are snapshots if you save them under Query Options.

With Charts they are correct at a point in time – you can export them (as a graphic) in order to be able to track back or retain information at different stages of work at this level.