Chapter 9 discusses how the structures of coding schemes, alternate groupings are key to moving forward with analysis. The nature and structures of the coding scheme in a software application and how it can be used can make a difference to the processes of analysis. There are two key aspects – in order to feel confident about the potential of a software application to support particular working styles the inherent nature of the structures is significant; following on from that the ability to manipulate the coding scheme and extract the most from it will increase confidence in the software. See all coloured illustrations (from the book) of software tasks and functions, numbered in chapter order.

Is ‘coding scheme’ the same as ‘theoretical framework’?

Escaping the confines of a scheme

There are two ways to export the information in your Code Book:

When using the Report Builder to generate reports, you can include "Study Overview" information (including "List of All Codes" or "List of Filtered Codes" if you're reporting on a subset of codes) on a separate page of the report. Simply check the appropriate "Study Overview" options before displaying or exporting the report. Be sure to check "Include Descriptions" so you have a record of your code descriptions as well. 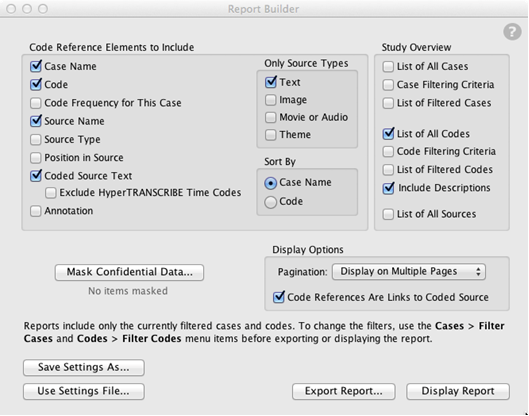 You can share lists of codes between studies by exporting one study’s codes and importing them into another. This is a useful capability if you want to synchronize the code lists in multiple copies of the same study file (for example, for a team of researchers all coding in the same study), or if you want all your studies to start with the same core list of codes.

To export the codes from your study, choose Export List from the Edit Code popup menu at the top of the Code Book. This command exports the entire code list, along with the code descriptions and group memberships, to a text file.

At times you may want to make changes to the codes used for already-coded source material. There are a number of possible reasons:

You have three options: Rename, Re-Code, and Duplicate.

Changing a code’s name with the Rename command

To simply change a code’s name throughout your study, select the code, then choose “Rename” from the Edit Code popup menu at the top of the Code Book. This command changes the code’s name to the new name you enter. Any coding you’ve done with the old name is changed to refer to the new name instead.

To assign all a code’s references to a different code, select the code you want to reassign, then choose “Re-Code” from the Edit Code popup menu at the top of the Code Book. Then either select a code to reassign the first one to, or create a new one. All the first code’s references are changed to use the second code instead.

The main difference between Rename and Re-Code is that a renamed code is removed from the Code Book and replaced by the new name. When you Re-Code, the original code is still in the Code Book and you can continue to use it. You can also re-code more than one code by selecting all the codes you want to change in the Code Book. All code references for all the selected codes are changed to the new code you choose.

NOTE: The Rename and Re-Code commands both cancel any case filters, so they affect all cases in your study, even if you have set up a case filter.

To make a copy of all the code references for a particular code, select the code in the Code Book, then choose “Duplicate” from the Edit Code popup menu. Then choose a code to duplicate the first one to (or create a new code and choose it). 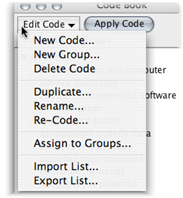 The “Rename”, “Re-Code”, and “Duplicate” commands may all be useful in merging codes. See above for more information.

In the Code Book, you can organize your codes by putting them into groups. You can create as many groups as you want. Groups can contain codes, other groups, or both—the same way that folders on your disk can contain files and subfolders. A group or code can be a member of one group or of several groups.

NOTE: A group is not a code; it’s a collection of codes. In some cases, this means its behavior is different. (For example, when you create a report, the report is listed by code name, not by group name.) If you later decide that a group should actually be a code in its own right, use the Duplicate command in the Edit Code popup menu at the top of the Code Book. Select all the codes in the group, then use the Duplicate command to create a code that will be applied to each code in the group.

The “All Codes” group

When you create a new study, the Code Book contains one group called “All Codes”. By default, new codes you create are placed in this group.

The All Codes top-level group always appears at the top of the list of codes. The All Codes group contains all the groups and codes in the Code Book, and cannot be deleted.

To create a code group, choose Codes > New Group and enter a name for the group. (A code group can have any of the same characters as a code: see the section above on creating new codes. However, a group can’t have the same name as an existing code.) The new group is created in the All Codes group.

Groups have an arrow to the left of the group’s name. You can click this arrow to expand or collapse the group, showing or hiding the group’s contents.

Moving codes and groups into a group

To move a code into a group, simply click the code and drag it to the group’s name in the Code Book. You can drag codes from the All Codes top-level group, or from one group to another. The cursor changes while you drag to indicate whether it’s over a group 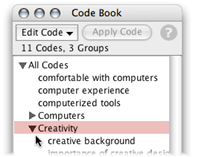 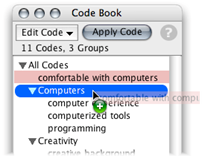 If you drag a group, instead of a code, it becomes a subgroup of the group you dragged it to. You can nest subgroups as deeply as you want.

To move a code or group out of its group, drag it to the special group “All Codes”.

Making a code a member of more than one group

A code (or group) can belong to any number of groups. To add a code to one group without removing it from the one it’s in, hold down the Alt key (Windows) or Option key (Mac OS X) as you drag. When you Alt/Option-drag a code, it is added to the target group, but remains in its original group also.

Codes that are members of more than one group display an asterisk (*) to the right of the code’s name.

NOTE: When you use a code that’s a member of more than one group, you must select one of the occurrences of the code in the list. However, HyperRESEARCH does not keep track of which group you selected from—only the code itself. Because of this, if you need to distinguish between a code in group A and a code in group B when you analyze your results, you should make two separate codes with different names, instead of placing the same code in both groups. This will ensure that you can treat the two codes differently when analyzing your results.

Managing codes in the Assign to Groups window 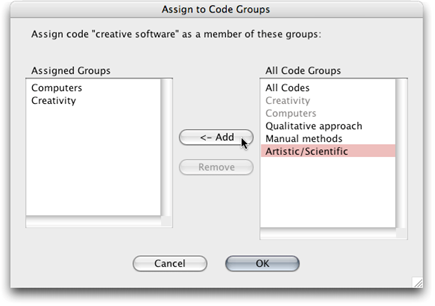 The Assigned Groups list on the left shows which groups this code, “creative software”, is already a member of: “Computers” and “Creativity”. The All Codes Groups list on the right shows all groups in this study’s Code Book. (Groups that already have the code as a member are grayed out.)

To add the code to another group, select the group in All Code Groups, then click Add.

If you delete a group that includes codes or subgroups, those codes or groups are also deleted. If a code is also a member of another group, it remains in that group; otherwise, it is removed completely from your study, along with all code references that use that code. Because of this, you should remove code groups with caution.

You can use a group to apply multiple codes to the same selected portion of source material. To apply all the codes in a group:

All codes in the group are applied to the selected portion of source material. (This includes codes that are in subgroups of the group you selected.)

When using a code filter, you can choose a group in the Filter By Name window. (For more information about code filters, see Filtering and Sorting Code References.) When you select a group, all the codes in the group are included in the filter. You can then create reports or perform analysis based on only the codes in that group.

NOTE: If a code appears in more than one group, then if you filter by one of the groups, all occurrences of that code will be filtered, regardless of which group you selected it from when coding your source material. The two occurrences are the same code (even though they are listed in two different groups), so they are treated as a single code when filtering.

These topics in the HyperRESEARCH Help and the User Guide may be helpful in completing the exercises for this chapter:

To find a topic, choose Help > HyperRESEARCH Help and look through the list on the left side of the Help window.

The next set of exercises and Chapter 10 in the book discuss the management of your analytic processes and interpretations through writing tools; you may get some ideas about systematic ways of proceeding with definitions and descriptions of codes annotations, reports and memos to support different aspects of your work. Go to next set of exercises !