Chapter 10 in the book is all about managing interpretations; managing where and how you make analytic notes, using software structures to ensure your thoughts do not get forgotten or your notes lost. Ways of expressing or visualizing connections and relationships are sometimes provided in software and help in the generation and management  of the ideas that you have about the data.  The literature that informs your work is very important and these software programs can be used in many different ways to manage cross referencing with substantive data or to manage the literature review itself. See all coloured illustrations (from the book) of software tasks and functions, numbered in chapter order.

Integrating notes with other work

In Dedoose part of the management of work and interpretations might have a lot to do with the collaborative possibilities of web-mounted project work since team-members can log on from different sites and work together –this aspect, along with related security issues follows on from the sections on memoing.

Overview – From a broad design standpoint, the memo system was designed to be as flexible as possible…and actually designed around many suggestions from Silvana di Gregorio, who you may know.  Memos can be free floating, as may be wanted by grounded theorists to track their analytical thinking or by instructors to leave assignments to students.  They can also be linked to any object or any number of objects.  I do lots of coding memos with my teams early in projects where we write memos around any challenges we have when developing coding criteria and then link the memo to the particular code AND to some of the challenging excerpts.  Later we can export these along with the associated excerpts and work through the challenges.  Others may link memos to descriptors (cases), entire documents, or locations in documents.

Memos Workspace – Memos are organized in a folder structure that you create based on your needs.  The structure can be flat or hierarchical.  The presentation can be post-it note like or a simple list as can be toggled with the bullet-point like icon in the upper right corner of the workspace.  And they can also be sorted by a number of parameters

Working with Memos – Memos can be created within the Memo Workspace, while editing the code tree, while creating or editing an excerpt, when viewing a document, or by clicking on a location in a document to create an ‘in line’ memo.  You just have to click on the ‘memo’ icon that will appear when in these modes, by clicking the ‘memo’ button when viewing a document, or by right-clicking on your mouse when looking to create an in-line memo and then selecting the create/link memo at cursor option.

Editing Memos and Memo Folders – these tasks can be done from the Memo Workspace or when viewing a memo in another context.  You can edit the memo content, change the folder in which the memo is stored, and revise the objects the memo is linked to by using the available controls.  Similarly, the Memo Folders can be edited at any time in the workspace. 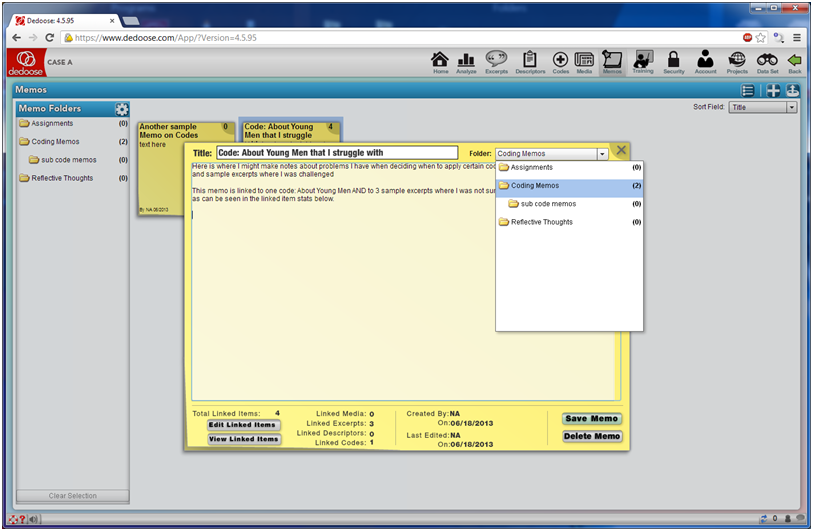 As a web based software application, Dedoose is natively collaborative.  Any number of users can be connected to a project and be working together simultaneously, in real time, from any Internet connected device.  Yes, there is a Dedoose Android app and Dedoose runs beautifully on an iPad through an app called Photon.

The project Security Center is where project administrators can control what privileges each user can have.  Every object has four settings: view, create, modify, and delete and each of these parameters can be set to allow very specific controls over what team members can see and do to the database.  In Dedoose we have pre-programmed a set of security profiles – each with varying access privileges – that project administrators, or any other user with access to the Security Center, can choose to use in the project. 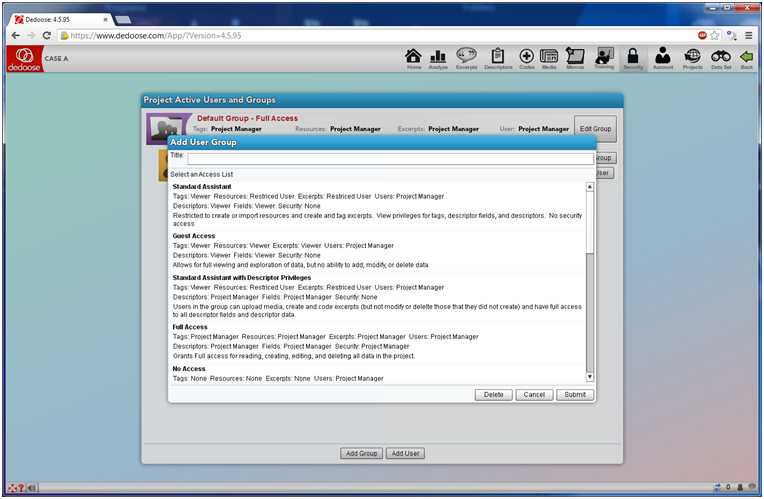 Since the launch of Dedoose, only two additional security groups have been set up upon request by users who needed something we’d not yet implemented.  Should other unique needs arise, it is a simple matter for the Dedoose development team to create and deploy new profiles.

The Dedoose Training Center was designed to help teams build and maintain inter-rater reliability.  Tests are created based on previously excerpted and coded text.  Others on a team enter the system and take the test where they are presented with the excerpt text (in the case of a code application test) and must select the codes they feel are appropriate for the excerpt blind to the codes previously applied.  After the test, they are presented with Cohen’s Kappa coefficient for each code included in the test, a pooled Kappa as an overall measure of performance, and a number of other diagnostics that are useful in working through discrepancies. Code weighting/rating tests include the excerpt text and the codes applied and the test taker must set the appropriate weight/rating.  In these tests, results include Pearson’s correlation coefficient and other metrics based on the range of values on a particular scale.  Here are few sample snapshots: 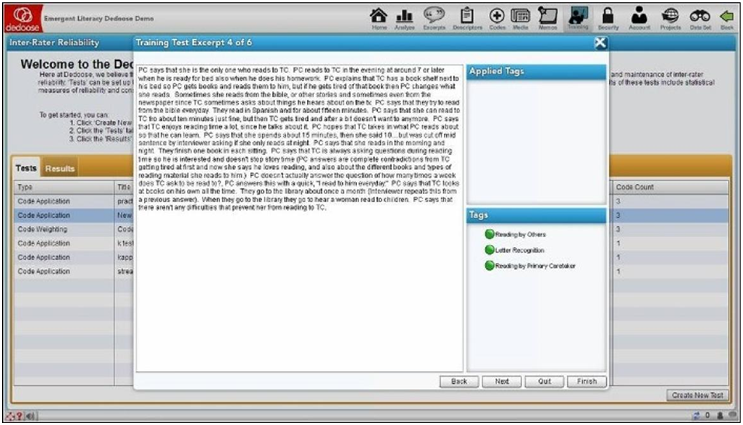 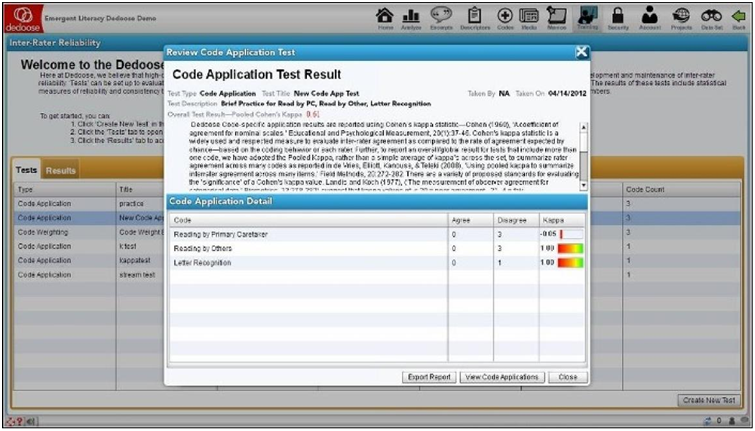 Built into Dedoose (and located in the project footer in the lower right corner) is a traditional chat system that users can take advantage of to communicate with others on the team who may also be actively accessing the database. 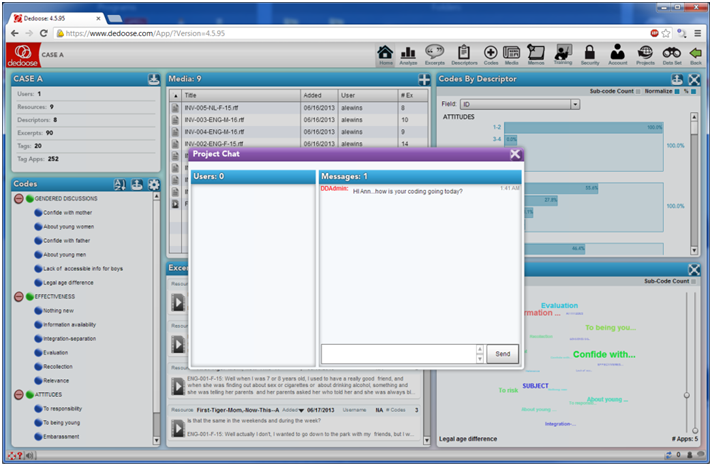 Further, all objects created in Dedoose are stamped with username of the team member who created it.  This information can be useful in searching and filtering alongside other types of data in the system.

Finally, while projects can always be copied and merged if needed, the vast majority of research teams simply log into the same project and off they go.  The moment a user submits a newly created object it is ‘owned’ by the project database and available to all authorized project users.

Further organization of data is key to all the routine support provided in Dedoose which emphasizes the application’s mixed methods credentials.