Chapter 12  discusses the variety of ways organisation of data can happen and the importance of particular organizing tools to enable different levels and complexity of interrogation. Chapter 6 discussed basic structures like folders which enable simple tidying up and filtering. This chapter takes the subject further and focuses on the need to assign multiple variables or attributes to each respondent or case, so that comparing within or across cases can happen via combinations of data and subset characteristics if required. See all coloured illustrations (from the book) of software tasks and functions, numbered in chapter order.

Illustrating the potential for interrogation

Timing, when to put organisational structures in place

HyperRESEARCH's case-based structure makes it easy to organize your data in any way you wish.

A case is the atomic unit of your study, the basic unit of analysis you are studying. How you define what a “case” is will depend on the nature of your study.

The Study Window up close 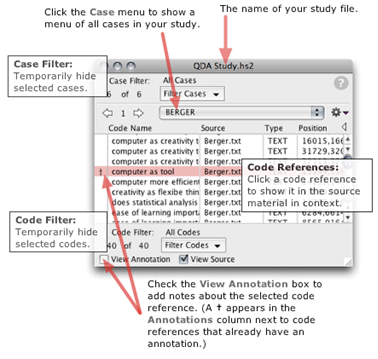 (For more about the study window, see the Study Window topic in the Help system.)

Using the Case A, Case B, and Case C sample data sets, here are some examples of how a researcher might organize cases and source files:

In addition to the interview, response to photos, and vignette data files for each respondent, the image file of each of the three photos could also be coded to each case. (In HyperRESEARCH, you can use any number of sources in a single case, and share sources across cases.)

Reviewing, coding, and annotating the Case A Literature files could be done using additional cases in the Young People's Perceptions study, or in a separate study file focusing mainly on the selected literature. Two or more studies can be combined at a later date using the "Import Other Study...." command. Or reports from each study can be generated and then coded into a third study as source material.

When analyzing the data by cases, you can use case filtering to focus on subsets of your data. Those subsets might include:

Case-study B – The Financial Crisis

Case B is a mixed-methods study that includes survey data.

With a wide array of source material (survey results, focus group transcripts, documents containing text and graphics from media sources, etc.) it can be difficult to decide how best to organize them within cases in a single study file -- or across multiple HyperRESEARCH studies.

One question to ask is: how finely detailed do you wish your analysis to be?

With Case B as an example, here are suggestions in increasing fineness of granularity:

Three cases, each case representing one of the following:

Thirteen cases, each case representing one of the following:

Many cases, each representing a person or entity (but be aware that the finer the granularity of your cases and codes, the more work it will be to codify, categorize, and analyze!):

There are many other ways to organize your source material using HyperRESEARCH's case structure and code and case filtering tools.

Just remember that if you wish to compare A to B, then A and B should each be coded to a separate case. While it is possible to change your decisions involving cases and codes as you progress in your coding and analysis, planning your approach in advance of creating your study will save you time and aggravation.

Here's what the Mixed Methods Importer will do: 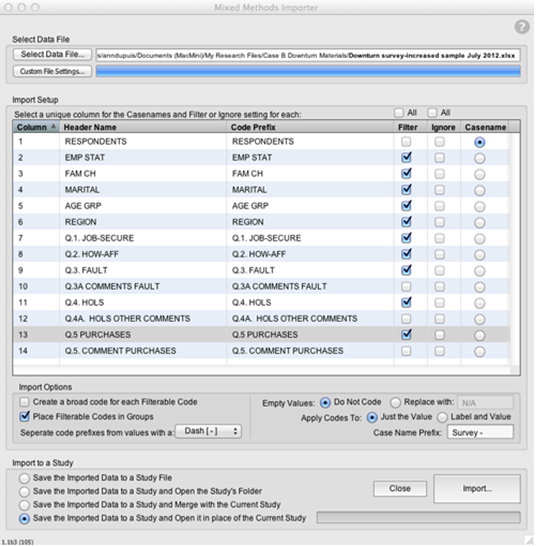 You can choose to use the study created from the spreadsheet/survey data as a separate study focusing on the survey results, or combine it with the focus group and/or media releases material provided with Case B.

Case filters let you choose to work with only a subset of your cases, hiding the others temporarily. In this way, you can analyze subgroups and compare them. Use them with variable codes to select cases based on demographics or other coded attributes or characteristics.

With case and code filters in place, you can browse your study and run reports (including code frequencies) containing only the subset of data you have filtered for.

To filter cases, choose an option from the Cases Filter Cases submenu. You can filter cases by simply choosing their names, or by creating criteria based on your codes (so you can look at only cases that include a certain combination of codes). There is no typing or syntax involved; you simply choose your codes from a list and then the appropriate Boolean operator (and, or, not) to build as complex an expression as necessary to filter a set of cases.

Examples of filtering criteria you can set up: 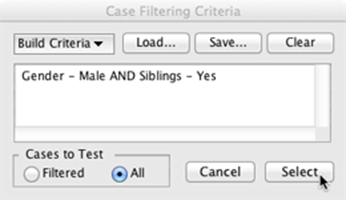 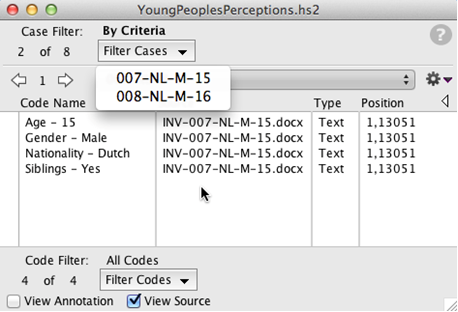 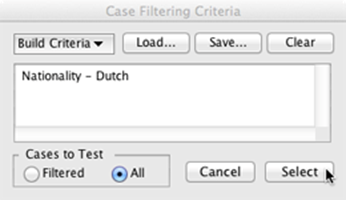 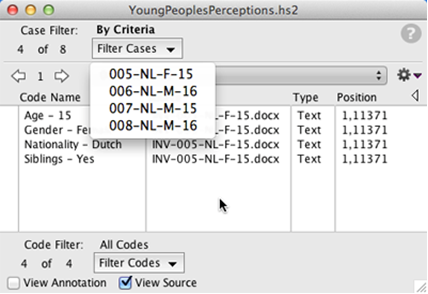 Case-study B – The Financial Crisis 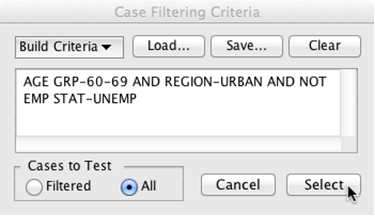 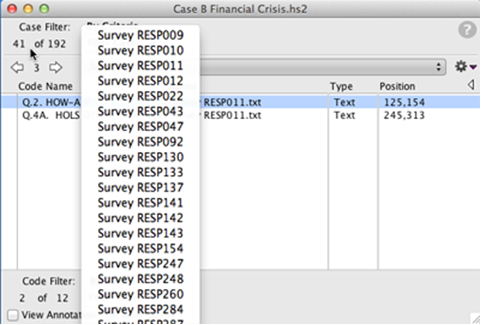 You can also filter codes. You can choose to work with only certain codes you select, or which match criteria you devise. Combine case and code filters to look at specific subsets of your cases and codes.

With case and code filters in place, you can build reports focusing on the specific data you are interested in. You can also browse the cases in the study window, examining only those cases and codes that pertain to your current focus within the data.

When creating a study where individual data files will each map to their own case (e.g. Case-study A - Young People’s Perceptions), follow these steps:

b.     Choose "Create New HyperRESEARCH Study" from the Welcome screen

c.     Choose "Save As" from the File menu. Give the study file a meaningful name, (e.g. "Case-study A" or "Young People's Perceptions") and save it in a location you can find again easily)

a.     With the Untitled case showing in the Study Window, choose Cases --> Rename Case and change the name to the first respondent's name or identification code (e.g. " 001-ENG-M-16")

a.     Click on the Code Book to make it the active window.

b.     Choose "New Code" from the drop-down menu at the top left of the code book

d.     Repeat until the variable / demographic codes you need are in your code book: 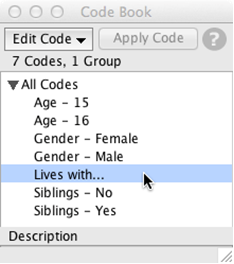 5.    Open a source file (double-click on the file name in the Sources List)

6.    Navigate to relevant case (choose from the drop-down list of case at the top of the Study Window, or choose "Go to Case...." from the Cases menu)

7. With the correct source file open and the matching case showing in the Study Window, apply variable codes to source file as a whole

a.     Click in the Source Window to make it the active window

b.     Select the entire file: Edit --> Select All (keyboard shortcut: cmd-a for Mac, ctrl-a for Windows) 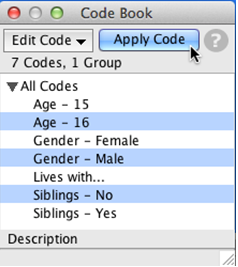 HyperRESEARCH will apply the selected codes to the selected source material (e.g. the entire document). The codes will appear on the active case (e.g. 001-ENG-M-16) in the Study Window:

Add annotations (memos) to the applied variable codes if you wish to record analytical insights related to the characteristics they represent.

Note: you don't necessarily need to do these steps in the order in which they're given. For example, you can create one case at a time, open its corresponding source file, and apply the appropriate variable codes (demographics, etc.) to the source file before moving on to repeat the process with the next case.

And of course you can begin coding the source files at any time with other codes (not just variable codes indicating demographics, etc.).

Exercise 2: Where multiple data files combine to constitute a unit of analysis

To work with data files where you have multiple sources for a given unit of analysis (e.g. a respondent), simply open and code the additional data files to the relevant case.

If you wish to use variable codes to filter other codes using the proximity functions available in the Filter Codes by Criteria window (e.g. find all the codes where "Gender - Male" and "Attitudes/embarrassment" are applied to the same or overlapping source selections), then you should apply the variable codes to the full selection of each source file on the case (as in Exercise 1).

*Provided the case matches the other criteria in the Filter Cases By Criteria settings as well.

Exercise 3: Where changes over time need to be tracked

For longitudinal studies, organize cases and source files by time periods appropriate to your data and research question.

You can also use variable codes to differentiate source material within the same file by speaker or other characteristics. Select the passage corresponding to the speaker, and apply a code identifying the speaker. These identification codes will be especially useful when filtering codes based on code proximity functions (see "Code Relationship Functions" in the Analysis topic in the Help system). They will allow you to look at the intersection of the speaker id code and one other code (e.g. "Speaker: R-RP382" and "Security").

Use the Autocode feature to quickly apply identification codes to the passages of each speaker. 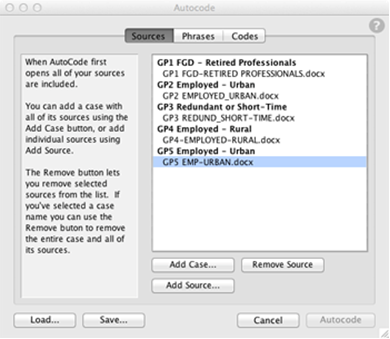 3. Click on the "Phrases" tab to set up the Phrase you will be searching for (the exact phrase that identifies each speaker in the text). The first participant listed in the "GP1 FGD-RETIRED PROFESSIONALS.docx" file is identified as "R-RP382" in the text, so that is the phrase we will have Autocode search for. 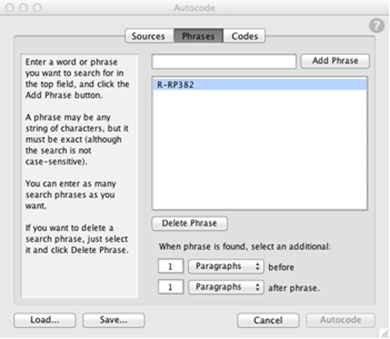 Note: A few of the participant responses appear in the text files as more than one paragraph. There are two ways to handle this situation:

a.     Before beginning to code your source files, review and edit them to make sure that a respondent ID is associated with every paragraph;
or

b.     After Autocoding, review the results and manually add the appropriate ID code to any paragraphs that were missed due to the lack of the searched-for phrase present in that paragraph.

c.     Use "Add Codes...." to call up the Code Selection dialog to select the code or codes you wish applied to the selected source material around every instance of the specified phrase. (Note: you can add additional variable codes such as "Gender: Male" in the same autocoding pass.)

If you haven't already created the appropriate ID codes in your code book, you can create the using the "New Code..." button in the Add Code dialog box. 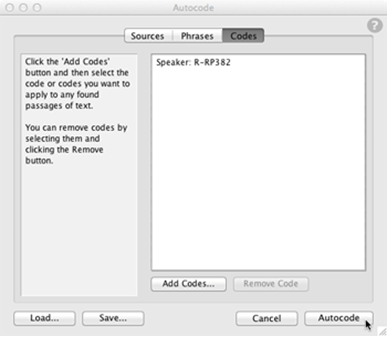 5. Once you have assigned the sources to your cases in the Sources tab, specified the phrase to search on, and added one or more codes to the Codes tab, click Autocode.

HyperRESEARCH will tell you how many codes have been automatically added to your study:

You can view the new references in the Study window: 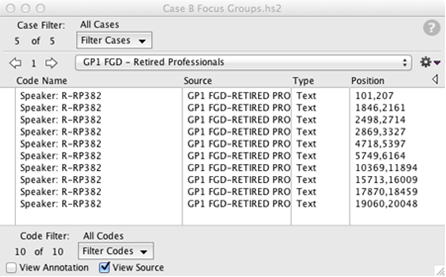 These topics in the HyperRESEARCH Help and the User Guide may be helpful in completing the exercises for this chapter:

To find a topic, choose Help > HyperRESEARCH Help and look through the list on the left side of the Help window.

Inevitably – data organization is all about enabling you to interrogate across or within cases or subsets.