Chapter 12 discusses the variety of ways organisation of data can happen and the importance of particular organizing tools to enable different levels and complexity of interrogation. Chapter 6 discussed basic structures like folders which enable simple tidying up and filtering. This chapter takes the subject further and focuses on the need to assign multiple variables or attributes to each respondent or case, so that comparing within or across cases can happen via combinations of data and subset characteristics if required. See all coloured illustrations (from the book) of software tasks and functions, numbered in chapter order.

Illustrating the potential for interrogation

Timing, when to put organisational structures in place

How to create variables – to assign e.g. socio-demographics to data

You may have already done several things earlier to organize data so some of these steps repeat what was covered then:

These are all aspects of organisation which will help you to interrogate or simply view the data required.

The ADD command in the VARIABLES menu is used to add new variables to the project file. This command displays a dialog box similar to the one used to create variables for a new data file.

The first step involved in creating a new project file is to define the initial structure of the project file. This structure is defined by the list of variables that each case will contain. A variable may contain a document or an image to be manually coded, but can also consist of a numeric value, a date, a Boolean value (true or false), etc. A single project can contain up to 2035 variables per case. It is possible to create several document and image variables for each case. The ability to store many documents per case is especially useful when the project involves a set of several document types. A document variable may also be created to store notes or comments that are specific to a case. QDA Miner can later be instructed to search and analyze specific document or image variables or in all documents 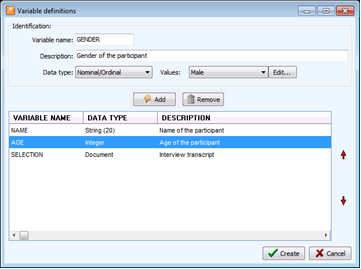 In the Variable Definitions dialog box (see above), you can define various attributes for these new variables, such as their name and whether they will contain numeric, alphanumeric values, or dates.

VARIABLE NAME The first edit box at the top of the dialog box allows you to enter a variable name. Each variable name must be unique (within that project file). Valid variable names begin with a letter and may contain letters, numbers or underscore characters. Punctuation marks, blank spaces, accentuated and other special characters are not permitted. The maximum variable name length is ten characters.

DESCRIPTION The Description option is used to enter a variable label that describes in more detail the content of the variable. You may leave this column blank if you wish since it is always possible to add or edit a description later using the VARIABLES | PROPERTIES command.

DATA TYPE Each variable in the data file must have a type. QDA Miner supports the following types:

When a nominal/ordinal data type is selected, you will be asked to first provide a list of values that this variable can take. To enter new values, click the EDIT button. A dialog box similar to the one below will appear: 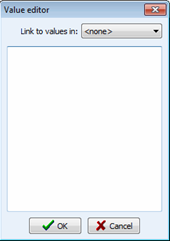 To create a new variable

To change the position of a variable in the list

The use of Variables and other organizing devices such as Cases, Group descriptors etc is all about the interrogation of data within and across those entities of data. Variables for instance can be selected as a filtering device in most forms of retrieval and querying process. See the next set of exercises associated with  the discussion in Chapter 13 in the book.